My sister-in-law Susie has some interesting ancestors.  I’ve written about two of them before—sisters Anna Grimm Wyatt and Eva Grimm Wyatt.  Going back further in time, I discovered Philip Paul Wyatt—Susie’s great-great grandfather—who had three wives named Elizabeth, and seems to have been something of a wanderer.

Philip was born in Somerset, England, in 1821.  His father was a successful farmer who had eight children with his first wife, Susanna:  James (we’ll get back to him later), our boy Philip, Mary, Susanna, William, Joan, Rhoda (who kept a diary that survived), and Elizabeth.

Philip was first married in England in 1844, to Elizabeth Quick.  The marriage record lists him as a “bachelor” and her as a “spinster”—in other words, first marriage for both.  Philip was a butcher by trade.  Soon they had a son named Mark John Quick Wyatt, born in 1845. 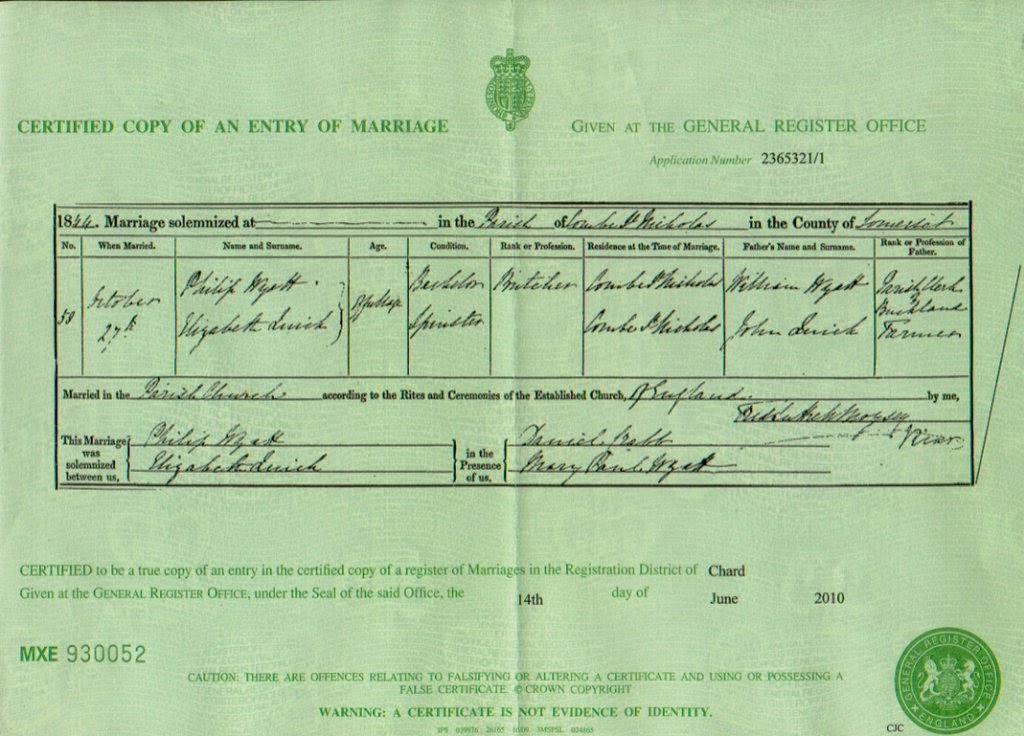 Philip and his first Elizabeth were separated by 1848, and Philip was on his way to America.  What caused Philip to abandon his family—or did Elizabeth flee her husband?  Or perhaps she didn’t want to go to America?  In the 1851 English census, Elizabeth and her five-year-old son are living as lodgers in someone else’s home.  Her son Mark later emigrated to Australia, where his descendants can still be found.   (I’ve corresponded with one.)

Anyway, in July 1848 Philip’s name is found on a ship passenger list, arriving in New York City on the ship “Robert Peel.”  On the same ship, listed right after Philip, are George and Elizabeth Towils and their young son John—the same Elizabeth who would become Philip’s second wife. 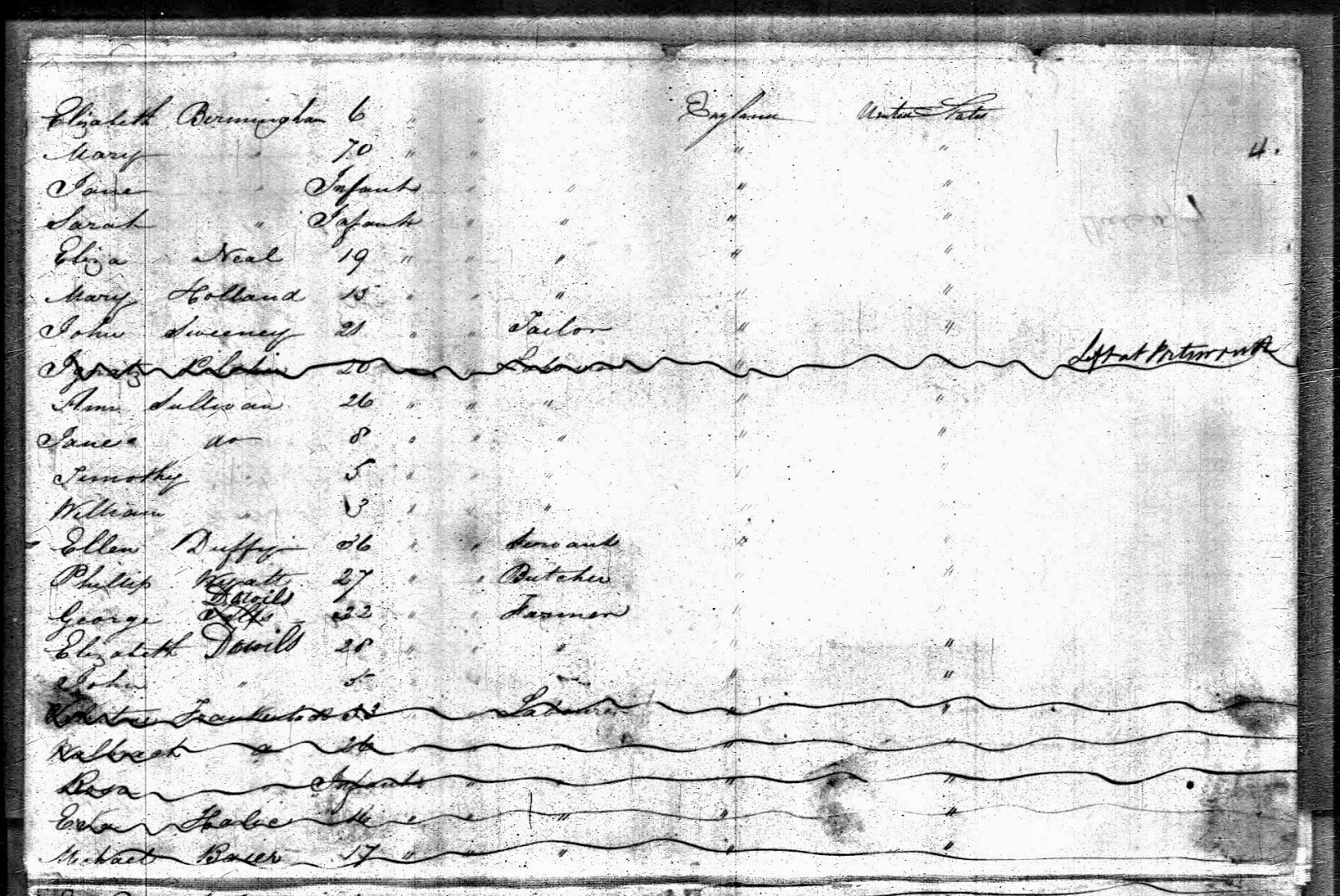 Philip and Elizabeth Rockett Towils were married two years later, in 1850.  (I wonder if Philip had a legal divorce from his first wife?)  They had four sons in the 1850s—Edward, Albert, Walter, and Adolphus—and also raised Betsy’s son John.

The family didn’t stay in one place for long…  In the 1850 census their residence is Albion, New York, where Philip worked as a butcher.  By 1860 they lived in Terre Haute, Indiana with their sons—but seven-year-old Albert was born in Kentucky, so they most likely lived there after they left New York but before they came to Indiana, where their younger sons were born.

They didn’t tarry long in Indiana.  The 1866 Oshkosh City Directory lists Philip as a butcher on Ferry Street.  The 1868 Oshkosh directory lists him, surprisingly, as a “hop grower.”  What happened to the butcher shop?

In 1870 the family appears in the census records twice!  In January they were enumerated with all five sons in St. Joseph, Missouri—a popular layover point for those planning to head west in the spring.  Then in August they were enumerated in San Jose, California.  Philip is now a “brewer” and their oldest two boys are farm laborers.  (Stepson John had struck out on his own by then.)

But they must not have stayed long in California.  An 1875 newspaper ad which ran in the Terre Haute “Saturday Evening Mail” said this:  “For the finest roasts—the tenderest steaks—the juiciest chops—the nicest cutlets—the best breakfast bacon—the choicest meat of all kinds, go to Phil Wyatt, the well known English Butcher, who makes a specialty of this business.” 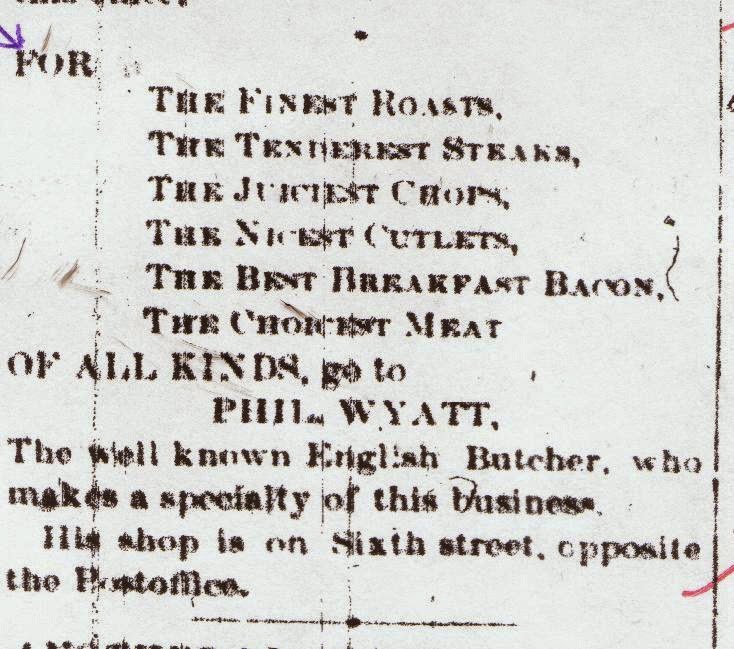 Philip’s second wife Elizabeth died in Indiana in 1877, of “chronic inflammation of the stomach,” according to her obituary, after being quite ill for three years.  Her obituary also contains this startling information:  “In accordance with the English custom Mrs. Wyatt requested that her body be kept for some time.  Her mother’s corpse was not interred until 16 days after death.”  The obit also says, “During all of her terrible sickness, Mrs. Wyatt displayed rare womanly fortitude.”  (Apparently fortitude was rare in women at that time.) 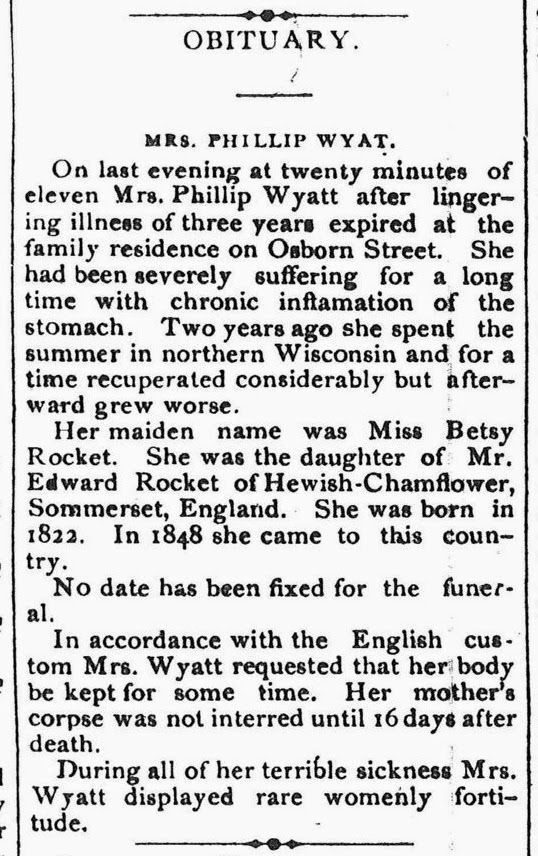 Philip soon moved on to Chicago.  In the 1880 census he is a widower aged sixty who lives with his son Albert and family (as do Philip’s other three sons).  Ten people in a Chicago apartment—it must have been tight quarters!  Philip is a butcher, and all four of his sons work in a butcher shop.

Philip didn’t remain a widower for long.  His brother James, an attorney back in Somerset, England, had a fiancé there—a wealthy spinster named Elizabeth Paull.  By 1881 Philip was living back in Somerset and he married his brother’s sweetheart there—making her Philip’s third Elizabeth.  On the marriage record, Philip states that he is a “cattle seller.” 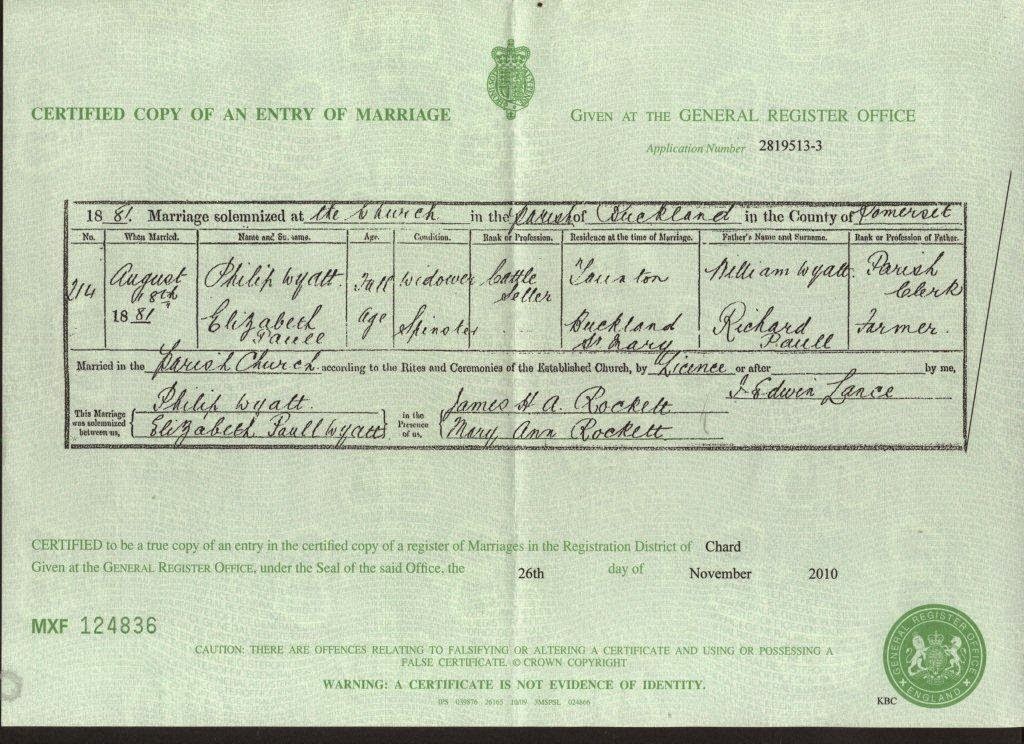 Somehow, Philip ended up separated from this third Elizabeth, back in America, and living in Oshkosh, Wisconsin, perhaps to be closer to his sisters.  Philip died of “brain paralysis” in 1892 in Oshkosh.  His obituary in the Oshkosh “Daily Northwestern” says that he “ran a meat market on Main Street for some time but subsequently sold it.”  There must have been bad blood between Elizabeth the Third and Philip’s four sons, because there were legal squabbles over land and property that went on at least through 1895.

English author Patricia Wendorf wrote a historical novel entitled “Double Wedding Ring” about Philip’s sister, Rhoda, based on Rhoda’s diaries.  The author changed the last name of the family to Graypaull, but kept the first names of all of the Wyatt siblings—except for Philip, whom she renamed “Mark” in her book.  Rhoda’s diary had much to say about her brother’s money problems and irresponsible, wandering ways.  Perhaps the author was afraid of Philip’s offended descendants sending hate mail…  But what fun is a family without a few black sheep in it?
Posted by Susan at 6:00 AM