A Murder in Chicago

While researching the ancestry of my sister-in-law Susie, I came across the stories of two sisters—Anna and Eva Grimm.  I wrote about Anna previously, so now it’s her sister Eva’s turn to have her story told. 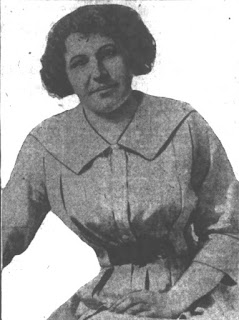 Eva Grimm was born around 1886 in Aurora, Illinois, and married her husband Albert Wyatt in 1908.  The marriage was not a match made in heaven.  Eva eventually ended up having an affair with a man she knew who lived in Chicago whose name was Herbert Conkright, and she even moved in with him for a few months one spring.  But eventually she returned to her husband Albert, although her contact with her lover continued—but not always by her choice.  When she ignored him, Herbert sometimes posed as a detective when attempting to get information about her from her family and friends.  One time, it was reported in the papers, he threatened to push her off a bridge to her death if she didn’t return to him.


The situation continued to deteriorate as she resisted his advances and threats.  Her lover could not stand the thought that she had gone back to her husband for good.  On November 14, 1920 he lured her to his boarding house in Chicago, where he fatally shot her in a fit of jealous rage, as the newspapers later reported it.  In the sensational trial held in 1921 that was splashed across the front pages of newspapers all over the Midwest and beyond and nicknamed “The Triangle Trial,” her lover was referred to as the “Fair-Haired He-Vamp.”  Many sordid details came out—including quotes from his letters to Eva, found in her husband Albert's attic—letters which were in turn endearing, threatening, and just plain creepy.  When it was all over, he was sentenced to 18 years at Joliet State Prison. 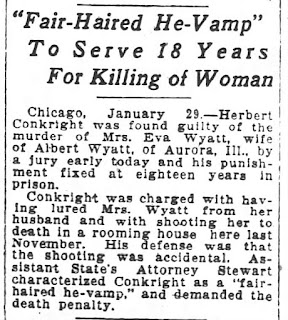 I found Eva’s grave at the same local cemetery where my parents are buried. Eva is buried in an unmarked grave, beside her mother and father. Her husband is buried elsewhere.

Another thing that speaks of the sad state of Eva and Albert's marriage: On her death certificate, Albert Wyatt gave his wife Eva’s age as “about 35” and her birth date as “unknown.” A very sad commentary on what strangers they were to each other, even after twelve years of marriage.