I have written quite a bit about my father and his service in the U.S. Army in World War II.  This story took place a few years later.

After the war, my father was required to be in the U.S. Army Reserves for a number of years, and go to training camp for a few weeks in the summer.  In fact, he once told me that he very nearly ended up in the Korean War—but his card didn’t get chosen during the random drawing of one in three cards in the file. 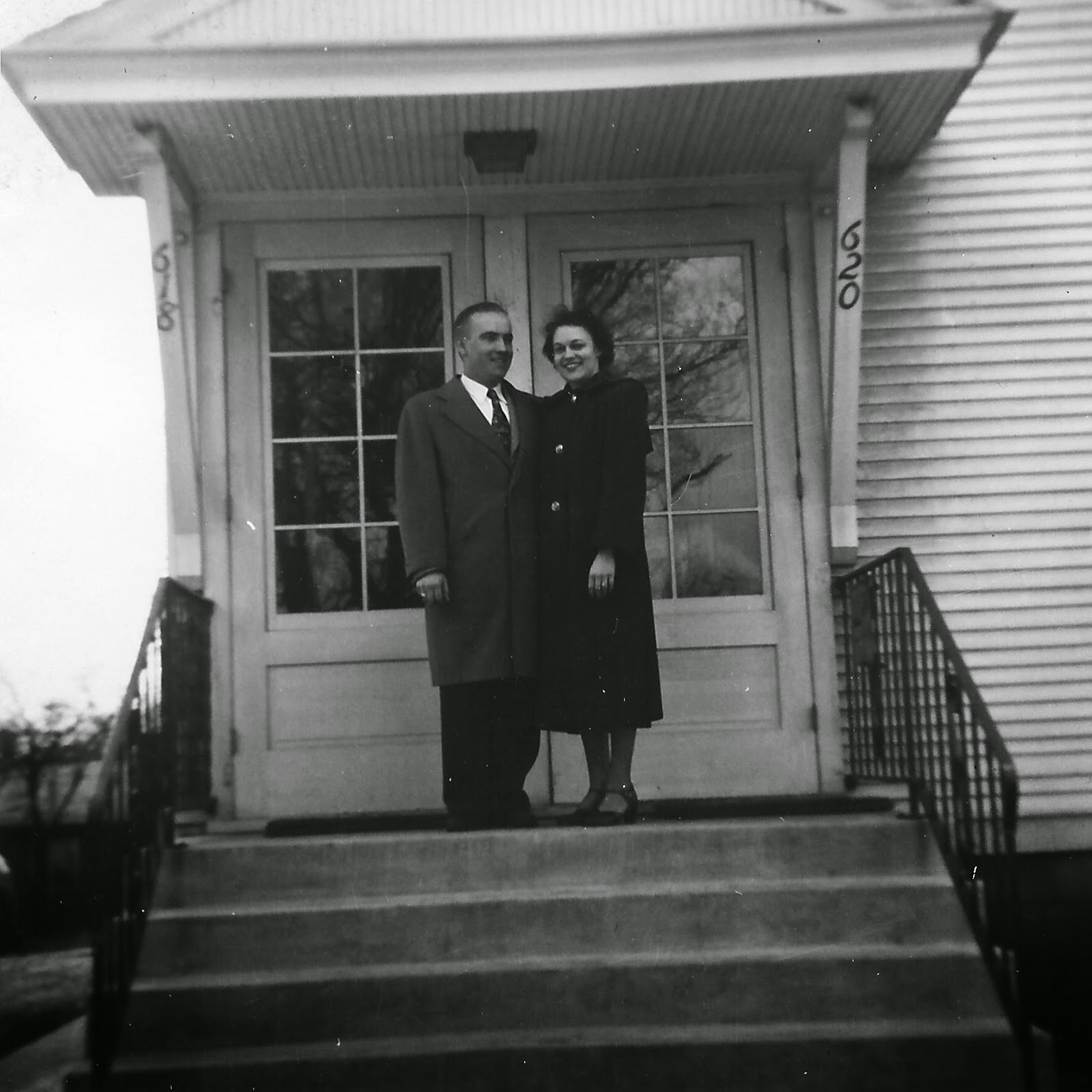 In the late 1940s he met my mother, Adra, and they were married in 1950.  They moved into an apartment at 620 Archer Avenue in Aurora—the downstairs of an old white frame house which has since been torn down.  (The first photo shows Robert and Adra on the front porch.)  Both had jobs within walking distance—Dad at a steel storage company called Equipto, and Mom at another steel storage company down the street called All-Steel. 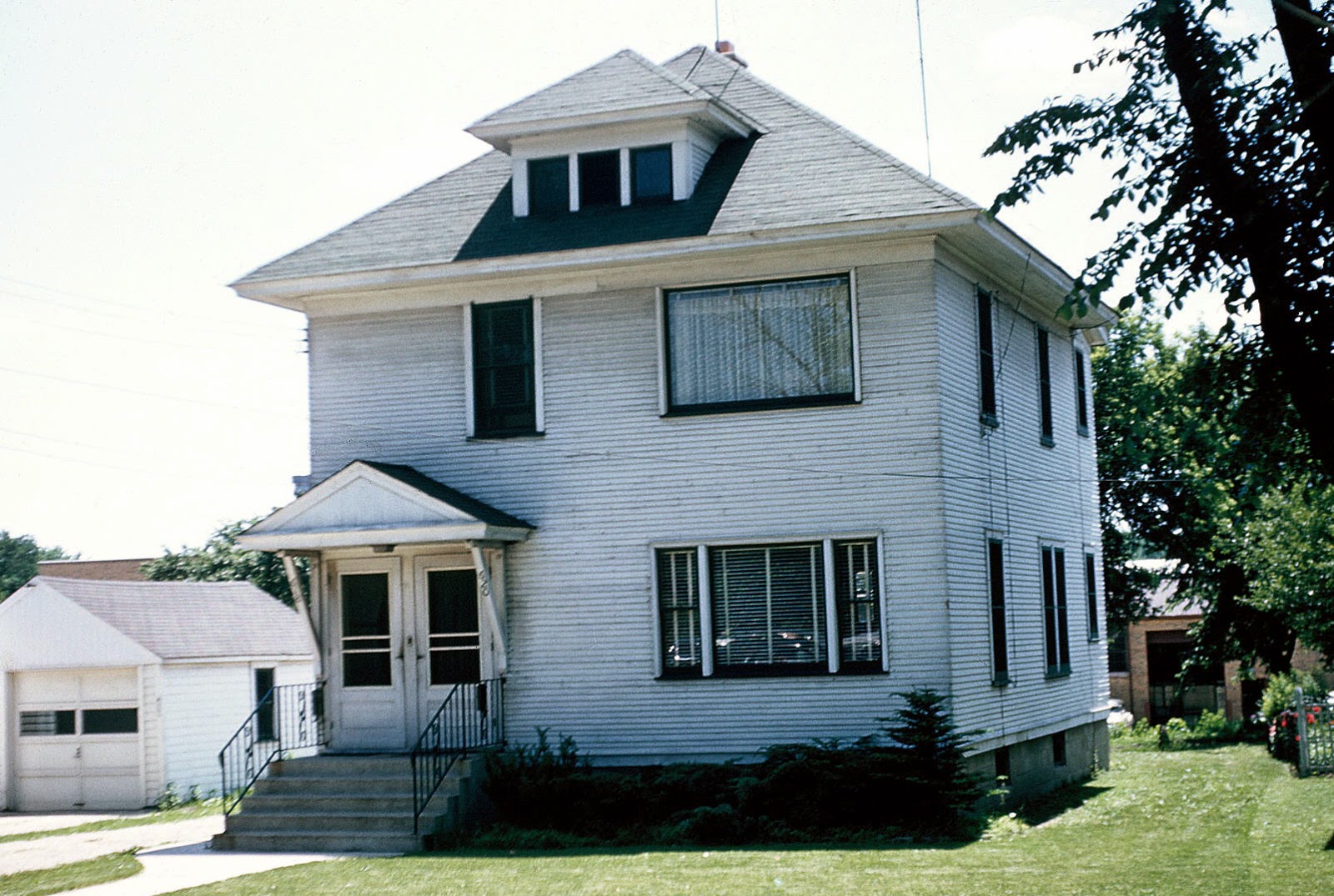 Into the upstairs apartment moved a young married couple very much like themselves—but yet so different.  Hartwig and Frieda were recent immigrants; they had arrived in the U.S. from Austria in 1952.  The 1930s had been a bad time to be a young man in Austria.  Hartwig, being five years younger than my father and therefore too young to be drafted into Hitler’s Army, ended up in an organization called the Hitler Youth.  He would have been 15 years old when Hitler invaded Poland in 1939.

I wanted to find out more about being a young person in Nazi Germany and Austria.  I found this quote from Adolf Hitler on the History Learning Site.  He said this of German schoolchildren:  “The weak must be chiselled away.  I want young men and women who can suffer pain.  A young German must be as swift as a greyhound, as tough as leather, and as hard as Krupp's steel.”

“These boys and girls enter our organizations at ten years of age, and often for the first time get a little fresh air; after four years of the Young Folk they go on to the Hitler Youth, where we have them for another four years… And even if they are still not complete National Socialists [Nazis], they go to Labor Service and are smoothed out there for another six, seven months…  And whatever class consciousness or social status might still be left…  the Wehrmacht [German armed forces] will take care of that.”—Adolf Hitler (1938)

But back to my story:  Hartwig and Frieda moved into the apartment above my parents.  This would have been in the early 1950s.  Even in my childhood in the 1960s, my father still referred to the Germans as “Krauts”—an old habit that died hard, after spending a year of his life on the front lines shooting Germans at every opportunity and in nearly continual fear for his life.  Dad continued to have nightmares about the war for twenty years after he came home.

But somehow, the two couples ended up friends.  I wonder if they ever talked about the war, or Hitler, or what it was like in Austria in the 1940s?  I don’t know.  I do know that Hartwig worked as a night watchman in a nearby factory, while he taught himself English and studied engineering books.  Eventually he got a better job there as a spot welder, then a maintenance electrician, then a mechanic, and then an engineer.  He and Frieda had four children and had a good life in America.

I remember, even after each couple purchased their own home in the later 1950s, my father and I dropping by their home or Hartwig dropping by ours.  I am so very glad that those two young couples, in their own small way, were a part of the healing, friendship, and forgiveness that needed to take place after one of the worst wars in modern history.