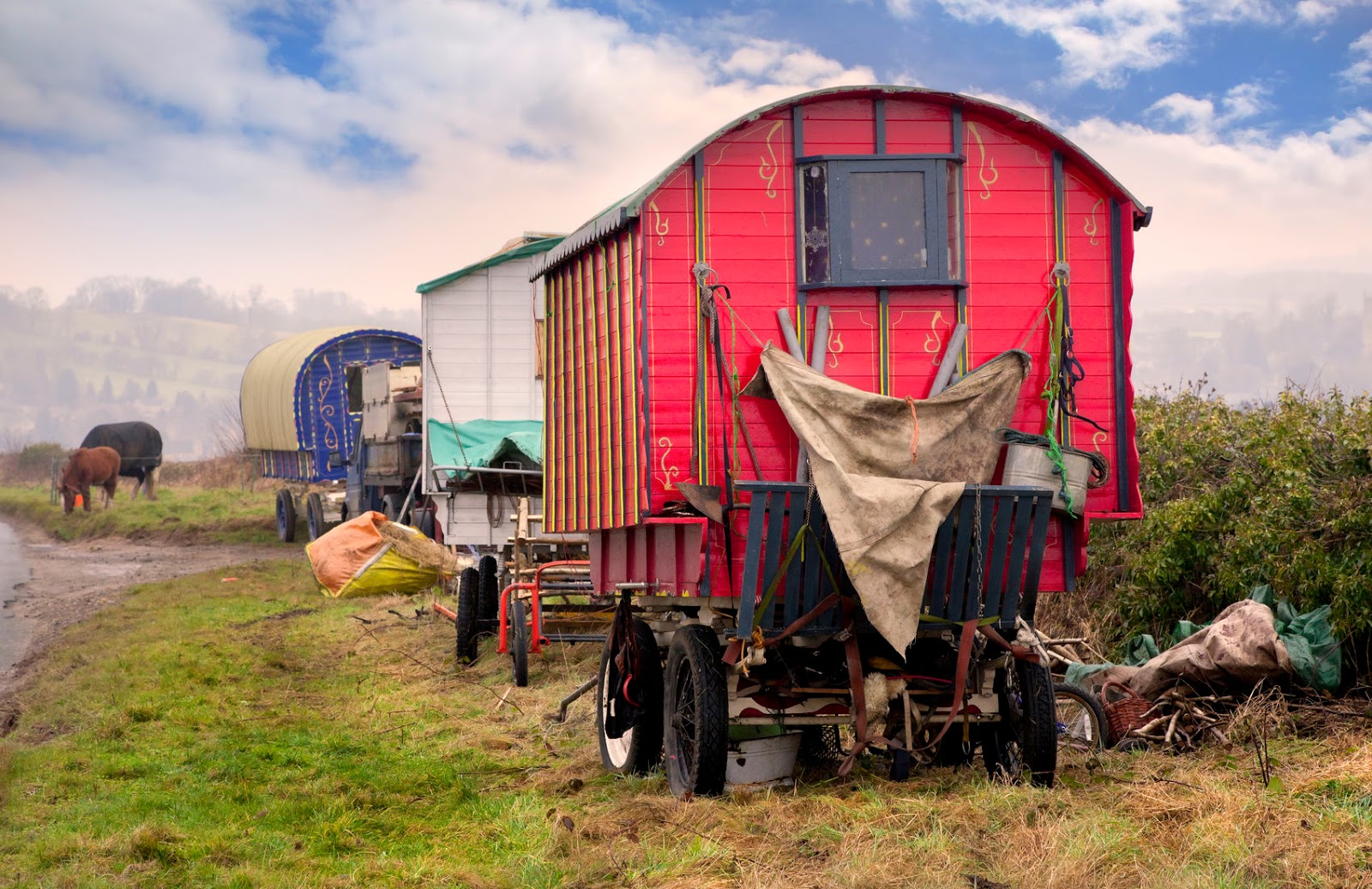 The other day I was looking over some family records, and I came across something my mother said years ago, in an interview with her cousin Gene, who was collecting the Erickson family history.  Mom said this about her childhood in the 1930s:

“Gypsies would come through the area every summer in their horse-drawn wagons during the Barbers Corner years.  They would steal the clothes off the clothesline, and steal chickens, turkeys, eggs, vegetables, bicycles, and everything else they could.  Everything had to be hidden or watched when the gypsies were passing through.  Sometimes they would come to the door and ask for food.”

The whole topic of the Gypsies has always intrigued me, ever since I saw the wagons of the “Travellers” when I was in England and Ireland.  Could there really have been Gypsies in rural areas of America like Barbers Corner, Illinois in the 1930s?

So I did a little digging…  and it turns out there were.

The website LivingHistoryFarm.org says that the Gypsies, more commonly known today as the “Roma,” came to the U.S. from Russia and the Balkan countries in the late 1800s.  Although their origins were in northwestern India, they were nicknamed “Gypsies” because it was mistakenly believed that they were Egyptians due to their dark skin, hair, and eyes.  They were persecuted almost everywhere they went; Hitler hated them like he hated the Jews, and he killed between half a million and a million of them.

The Gypsies were always a roving people (their name, Roma, means “wanderer”) and that held true in the United States during the Great Depression.  In those days they often traveled in caravans of covered wagons pulled by horses.  Elroy Hoffman remembers them from his Nebraska childhood.  “They’d park somewhere to feed the horses, eat there along the road…  They’d come up to our place to get food.”  Another Nebraskan, Mildred Opitz, remembers being afraid of them—they dressed differently than the locals, spoke a different language, and looked different.  She said the men were often horse traders, and the women made jewelry and baskets to sell or told fortunes.  She said they traveled in clans and had brightly painted wooden wagons.

The website DailyNewsOnline.com had a post on April 14, 2013, recalling the days of the Gypsies in western New York State during the Depression.  The article says that bands of Gypsies traveled in covered wagons and camped on the outskirts of town each spring from the early 1900s into the 1950s and beyond.  (In later years they favored Cadillacs over wagons!)  The women would work as healers or fortune tellers.  The police would warn local residents to stay away from them, and at times, if the Gypsies fleeced too many locals out of their money, they would either be arrested or told to leave the area.

And are there still ethnic Gypsies (Roma) in America today?  The Website EveryCulture.com says that there are probably as few as 100,000 or as many as a million, from several different ethnic subgroups.  They came to the United states from Russia or Eastern Europe (the Rom); Great Britain (the Romnichals); Sloviakia (the Baschalde); and Hungary (the Romungre); and another half dozen places in Europe.   The article says, “It is uncertain how many Gypsies are in the United States because many Gypsies’ entry was undocumented, and others were recorded by their country of origin and not as Gypsies.”  Also, “Many Roma themselves do not admit to their true ethic origins for economic and social reasons.”

Today many of them still travel, but others are settled in northern urban areas like Los Angeles, Chicago, Boston, Atlanta, and Dallas, mostly in trailer parks.  Some more conservative groups have settled in rural Texas and Arkansas.  They still have a powerful group identity and don’t often socialize or intermarry with outsiders.  They have their own language, cuisine, clothing, marriage customs, music, and traditions about health, religion, and family dynamics.  Today they are often used car dealers and repairmen or sell watches and jewelry—along with the traditional trade of fortune-telling, which is alive and well.
Image:  Andrew Rowland via 123rf.com