One of my clients has a nagging question and I’m trying to help her answer it.  Her father never knew his father, because for some reason that has been lost to history, the man left his wife and baby daughter and disappeared into the mist, around the time his son was born in 1924.


George Wendell Phillips was born in Salamanca, Cattaraugus County, New York on November 21, 1887, according to his WWI draft card.  The draft card gives a few more clues.  By 1917 he was 29 and living in North Tonawanda in Niagara County, New York, and working across the state border as a hotel clerk at Reed House in Erie, Pennsylvania.  He was of medium height and weight, gray eyes, and brown hair.  When asked about previous military service, he said that he had risen “from private to captain at Chamberlain Military Institute in Randolph, New York.”  The above photo was taken either during WWI or perhaps earlier, when he was at Chamberlain.


His father, who may have been named George or possibly Benjamin, was born in Wales.  But he had passed away by the 1900 census, and George’s mother Minnie is listed as a widow who has borne “2 children, 1 still living.”  This photo may be George’s parents, but we can’t be sure. 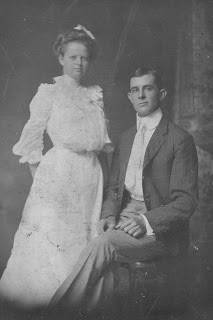 Somehow George met a young woman from Florida named Francis Norton, who went by the nickname “Frankie” all her life.  How the two of them found each other is part of the mystery.


George was quite close to his mother, Minnie, and after he and Frankie were married, it appears that they lived with her in New York.  And when their daughter was born in Pennsylvania a year later, George and Francis named her “Minnie.”


Now the story gets murky…  By 1924, Francis was back in Florida, giving birth to a son who never knew his father.  How Francis went from a wife and young mother in Pennsylvania in 1921, to a single mother in Florida in 1924, is anybody’s guess.


Francis remarried, but she had no more children.  Her son and daughter never knew anything about their father, and both of them have now passed away.  But my client, who is George and Francis’ granddaughter, found her missing grandfather’s name in an old family Bible, and she has never stopped being curious about who he was and why he left his young family.


We’ll probably never know the “why” of George Wendell Phillips’ disappearance.  But I’d surely love to tell my client what happened to him after he dropped out of sight in 1924.  Maybe someone out there knows something.


I did crack the case, with some help!