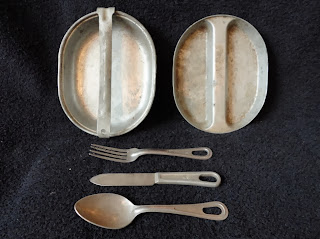 The first photograph is of Dad’s very well-worn mess kit.  The five pieces appear to be made of tin.  They are lightweight and fit together nicely.  The handle on the larger piece can be extended to turn it into a cooking pan.  I believe he carried a tin cup as well, but if he did, it didn’t survive. 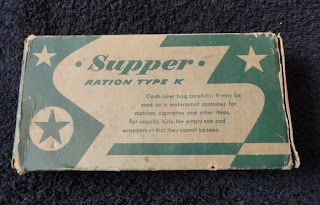 The green “Supper Ration Type K,” part of a series more commonly known as “K Rations,” is in pretty bad shape after sixty years; the can has rusted through and the contents have dried up.  The front says this: “Open inner bag carefully.  It maybe be used as a waterproof container for matches, cigarettes, and other items.  For security, hid the empty can and wrappers so that they cannot be seen.”  The contents are listed on the back:  “Meat:  eat cold, or after boiling can in water, or after frying in its own fat with added biscuit crumbs.  Assorted biscuits.  Boullion:  add to two thirds canteen cup of not or cold water.  Confection.  Cigarettes.  Chewing gum.”  Cigarettes were always included.  I remember Dad saying it was the only way he could keep his nerves steady enough to do the things he was being asked to do.

The box itself is cardboard and coated in wax.  I remember Dad saying that you could empty the box and then put it on the ground and set fire to it, and it would burn like a candle for long enough to heat up your water for coffee, or your food. 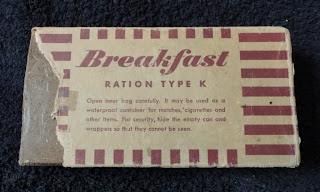 The red “Breakfast Ration Type K” has the same message printed on the front.  The breakfast box contains these items:  “Meat and eggs:  eat cold, or after heating by boiling can in water.  Assorted biscuits.  Coffee:  add to one third canteen cup of hot or cold water.  Fruit bar:  eat cold or make into jam by stewing 3 to 5 minutes in about 4 spoonfuls of water.  Sugar.  Chewing gum.  Cigarettes.”  One more item was included but not listed:  a small roll of khaki green toilet paper.

Dad was a part of the Army of Occupation for six months after the war ended, and he also brought back some items that he kept as souvenirs of the Nazis.  I’ll talk about those next, in Part Three.