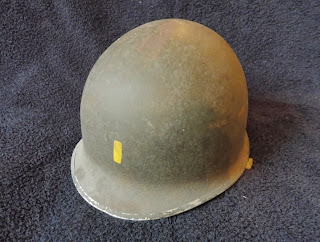 I don’t know how many times this helmet saved my father’s life—probably more times than he could count.  He was shot at, hit by shell fragments, and thrown to the ground by the concussive power of large artillery.  The helmet is very heavy, but I bet it was worth its weight in gold to a foot soldier.  My husband, an army veteran, smiled when he saw Dad’s helmet.  “Your father was a second lieutenant,” he said.  How did he know?  He told me that when he was in the army in the 1970s, soldiers had a nickname for second lieutenants—they called them “butter bars” because of the single yellow stripe on their helmets. 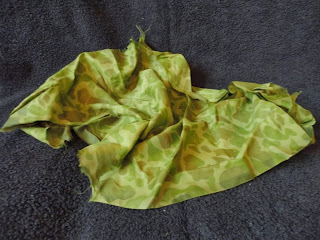 The green silk piece of camouflage cloth, Dad once told me, was to wrap around his helmet in those instances when getting one’s head in the line of fire was unavoidable, I suppose in order to get a better view.  That little piece of cloth might have saved his life a time or two. 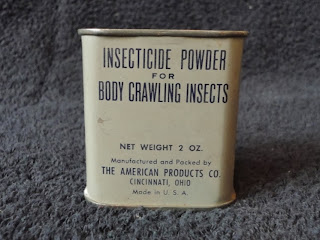 The third item was for a different kind of protection—“Insecticide Powder for Body Crawling Insects.”  I wonder how often Dad had to make use of that?  The directions on the back say to pay particular attention to the seams of one’s clothes.  “Repeat applications at one or two week intervals, depending on the abundance of lice.”  Dad also carried a bottle of little white iodine pills to drop into his canteen of water, in those instances when he had to fill up his canteen with local water that might have some kind of ‘bugs’ in it.