The Military Service of Norman Mosey 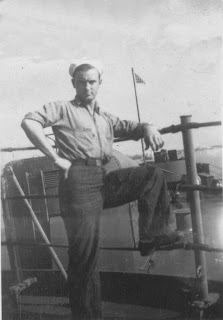 Almost a year ago, I wrote my very first blog post—“For the Love of Norman.”  It was about my quest to record the family history of my father-in-law and his death in the middle of our project.  I mentioned that after he died, I finished recording the story of his military service, using the papers he left on his living room table to share with me.  Here it is, in condensed form…

Norman Mosey was in the U.S. Navy from March 1944 to June 1946.  He served in the Pacific Theatre during World War II as a “TM 3/C” (Torpedoman’s Mate Third Class).  He met his future wife Donna via letters she wrote to him during the war.  His “vessels and stations served on” included:

His training began with 8 weeks of boot camp at the Farragut Naval Training Station.  The 4,000-acre Farragut was the second-largest naval training center in the world.  Drilling was given in seamanship, military discipline, physical fitness, and Naval procedure.  Vessels on nearby Lake Pend Orielle were used for training on the water.  The men learned to march, row, swim, and use firearms.  Over 293,000 sailors (“Blue Jackets”) received basic training at Farragut.  It was also used as a POW camp; 900 Germans worked as gardeners and maintenance men there.

In May 1944, after a 10-day furlough, Norman was sent to the Advance Base Personnel Depot at San Bruno, California.  He says he did nothing but menial work there, so after four months he applied for a transfer to Fleet Service School (Advanced Torpedo) in San Diego, where he had 16 weeks of torpedo training in all aspects from assembly to repair in late 1944.

Norman served on the USS Sierra in 1945.  It was a “Destroyer Tender” with 1,050 crewmen that serviced destroyers and destroyer escorts.  In March 1945 the Sierra went to the Caroline Islands, then the Philippines, for anticipated strikes against the Japanese mainland, but the surrender of Japan ended that assignment.  Norman was at Leyte Gulf, Philippines when the Japanese surrendered; he remembers all the Navy ships firing off ordnance of every kind—or in the case of his ship, flares, since they didn’t have ordnance aboard.

The Sierra sailed in September 1945 for Japan, Korea, and Shanghai, China, where Norman visited a Japanese prison camp.  He was sent home on emergency leave in December 1945 due to the death of his father.  He spent much time with Donna while he was home.

After his leave he was sent to San Diego to finish out his service.  He served on the USS Stevens, a Fletcher-class Destroyer.  The Stevens had seen much action in the Pacific Theatre during the war, but at this point it was undergoing a six-month “deactivation overhaul” before being decommissioned.

Norman was honorably discharged in June 1946.  He married Donna later that year in Clare County, Michigan.