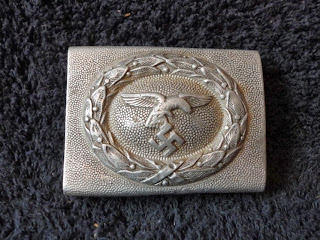 The first photo is a belt buckle that my father retrieved from the body of a dead Nazi soldier.  (He brought home a handful of this type of items with the Nazi swastika and eagle on them.)  In a letter home to his parents he said this about how he came into possession of it:  “I have a belt buckle I’m going to send home.  When I do, save it, as I got it in a personal fight with a German sergeant at about 10 paces range and shot him 6 times and cut off his belt buckle and insignia.  Here is the insignia.”

A similar thing that Dad brought back is a belt buckle that bears the German words “Gott Mit Uns”—which is to say, “God With Us.” 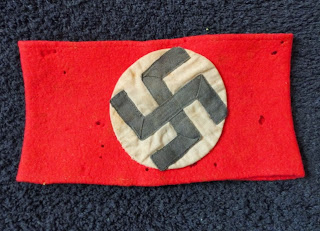 The second item is made of red wool—thus the moth holes it acquired in its half century in my parents’ attic.  It is a Nazi arm band such as I’ve seen in old photographs.  He also managed to bring home a huge Nazi flag, as big as the front side of our house, which he removed from a stadium of some type after the war was over.  I remember his saying that the American troops went door to door, clearing out the Nazi propaganda from each house and making big bonfires of it in the streets.  But a few things ended up in the American soldiers’ duffel bags instead.  Dad said this in a letter home shortly after the Nazi surrender:

“These Germans are funny.  All of them hate Hitler, and never had anything to do with him, and are glad to see us, etc., etc.  Then we search their houses and drag uniforms, pictures of Hitler, charter membership cards to the Nazi party, and everything else out.  What a bunch of cheerful liars.” 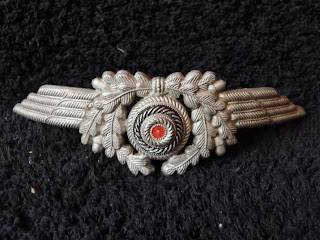 The third item came from the front of a Nazi officer’s hat.  I don’t know the story of how my father came into possession of it, but I think it’s safe to say that its original owner didn’t part with it willingly!