Getting in Touch With My Inner Swede 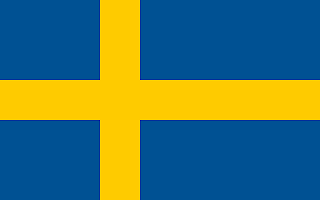 Recently I wrote about “lutefisk,” and that got me thinking about my Swedish roots.

Last year I had my DNA tested and it came out 53% Scandinavian.  But growing up a Wallin in the Midwest, it felt like much more.  Looking at my hair, my friends agree; while they are going gray in their middle age, I faded to platinum blonde.  My family tree shows more like 62.5% Swede—five great-grandparents out of eight emigrated from Sweden.  My four grandparents’ surnames are Wallin, Peterson, Anderson, and Erickson.  (The Erickson branch was from northern Germany.)  You’ll find no offensive “-sen” endings on these last names—that would mean Norwegian, and Grandma Wallin had no use for Norwegians.

I’ve inherited a few things from The Old Country, but not many.  My great-grandparents all came as young adults, with very little but the clothes on their backs.  Only one of the five Swedes who came, my great-grandmother Emelia Fryksdal Peterson, ever saw the old country again, when she went back to Sweden with two of her daughters in 1920, shortly after Great Grandpa died.  A postcard survives from that trip, showing the town where they stayed (Sandviken): 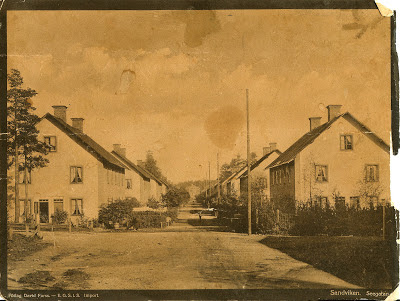 My Grandma Sara Peterson Wallin said in the 1940 census record that her mother tongue was Swedish, and I believe it.  She had quite a few Swedish books in her possession, and even in her old age, she could open one and read out of it without much effort.  My father remembers as a very young child that the rule was this:  If his grandparents spoke to him in Swedish, he was to answer in Swedish, and if they spoke to him in English, he should answer in English.

My Grandpa Sture Wallin was next-to-youngest of seven Wallin children, the others (in order of age) being Isador, Inez, Iranus, Ithel, Aurora, and Leonard.  My father said that my great-grandpa Frederick Wallin was a bit of a Swedish history buff, which accounts for his children’s names.  Sten Sture, for instance, was a Swedish statesman who “beat up on the Danes,” which would have put him in high favor with Great Grandpa.

In my childhood and youth, the Wallins gathered at Grandma Sara and Grandpa Sture’s house on Christmas Eve.  Besides the traditional Christmas lutefisk and the delicious butter cookies which we called “Swedish Spritz,” there were Swedish meatballs and rice pudding with a raisin in it.  It was said that whoever ended up with the raisin would have good luck in the coming year.

Things were a little less Swedish the rest of the year—but compared to my middle-class Midwestern friends, this was still far more ethnicity than most of them were exposed to!

In my younger days, I colored my hair brown.  But as I have gotten older and given up that expensive and high-maintenance habit, I have gotten in touch again with my Inner Swede.  I think my father and grandparents would be pleased about that.  As Grandpa Wallin said to my brother one time many years ago, “Remember, Bruce, you are a Swede.  And nobody can outthink a Swede, nobody can outwork a Swede, and nobody can outfight a Swede.”