Grandma Wallin—Ahead of Her Time

My paternal grandmother was Sara Elizabeth Peterson Wallin, whose father Charles Peterson I will write about in a future post.  It was Grandma Wallin who gave me my love of genealogy (and some of my Swedish genes). 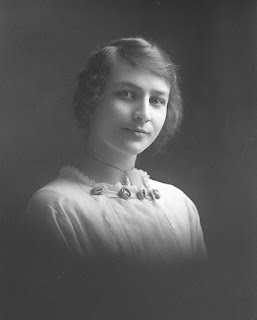 Grandma was born in Nebraska in 1894 and died nearly 100 years later, in 1986.  She grew up at a time when girls, especially daughters of immigrants on the Nebraska prairie, didn’t think about much except getting married and having a family.  But Grandma was smarter than most, and more ambitious than most.  She managed, after graduating eighth grade, to attend a nearby coed ‘college’ (as the word was used then), Luther College, and then get a job at a local bank, the Hordville Bank.  She did well there—well enough that when the owner/president of the bank needed to be out of town, Sara ran the bank.  But when WWI ended and her sweetheart came home from France, she gladly gave that up and settled down.  She and Sture Nels Wallin were married in 1920, after a seven-year-long courtship.


When I knew her, half a century later, she was interested in genealogy, and it rubbed off on me.  I spent a few happy afternoons in my childhood walking around a local cemetery with her, reading each gravestone and imagining the lives of those they described.  I still remember her handwritten charts showing her ancestry and Grandpa’s.  I ended up with that information in later years, and it became the basis of a family tree that now has nearly 10,000 members on it.


But what I remember most about Grandma Wallin was her insistence that all her grandchildren, girls included, should try to get an education.  (That, and the lutefisk I avoided like the plague every Christmastime.)


So thank you for the inspiration, Grandma Wallin.  You are gone but not forgotten! 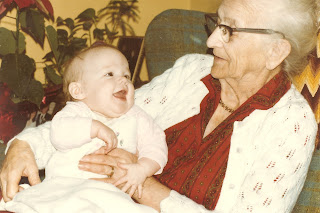