Lutefisk: Scourge of the Scandinavians 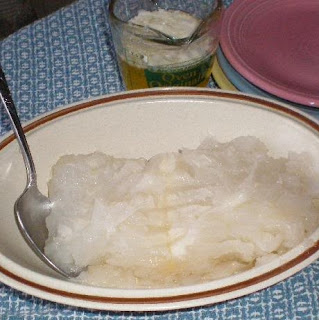 As a person of Scandinavian ancestry, I feel compelled to apologize to the world for a great injustice which my people have inflicted upon it—namely, lutefisk.


For those of you fortunate enough to be unfamiliar with lutefisk, allow me to enlighten you.  Are you strong of stomach and sitting down?  Good...  Lutefisk (a/k/a lutfisk) is dried whitefish (usually cod) that has been soaked in lye (yes, I said lye!) for several days and then boiled.  Wikipedia says, “It is gelatinous in texture, and has an extremely strong, pungent odor.”  Indeed.


Here is my Aunt Helen, dropping lutefisk into a boiling pot in 1972.  Notice how the normally cheery ceramic cookie jar sitting on a ledge above the stove has taken on a disturbing and sinister look, just from the lutefisk fumes wafting past it... 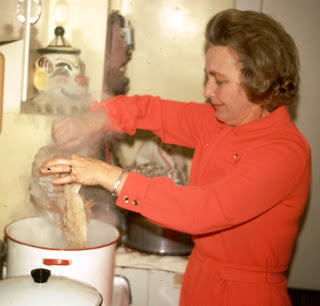 For those of you with some knowledge of both the Bible and lutefisk, you will appreciate that my father (and many others in the know) referred to lutefisk as “The Piece of Cod that passeth all understanding.”  Amen to that.

In my childhood, when we gathered at Grandpa and Grandma Wallin’s house on Christmas Eve, lutefisk was always on the menu—indeed, it was the star of the show.  Even the presence of Swedish meatballs and those delectable little buttery cookies we called “Swedish spritz” couldn’t make up for its presence—or its aroma…  Both my aunts made their kids eat it, but my father had a hard time enforcing that rule with his own brood, since my mother wouldn’t touch the stuff.  So I was spared the tasting, but not the looking or the smelling.


After supper came the opening of the presents, and there were always plenty of them to go around—but not until the dishes were washed—that tradition was sacred.  I know now that this was more than just a habit, or a way to tease and torment the grandkids.  Wikipedia also says this:  “When cooking and eating lutefisk, it is important to clean the lutefisk and its residue off pans, plates, and utensils immediately.  Lutefisk left overnight becomes nearly impossible to remove.”  Wake up, Scandinavians—what does that tell you about what it is doing to your digestive tract?


I’ve been told that in recent years, lutefisk has become harder and harder to procure…  Perhaps my childhood prayers were answered after all.
Posted by Susan at 5:50 AM