The View from an Amish Buggy 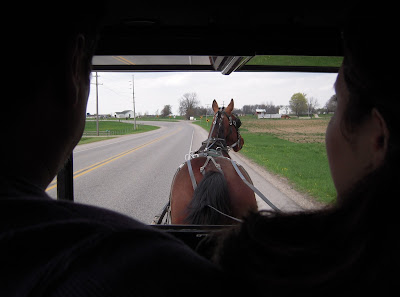 I’ve had Amish friends for a long time.  I took this picture from the back seat of their buggy—one of my favorite places to be...  When I first got to know my original Amish friends, their eight children ranged in age from two to eighteen.  Now the youngest is out of school (which means eighth grade in their culture) and the oldest has a houseful of children of her own.  Six of my Amish friends came to my wedding, and I’ve been to two weddings of theirs.


A year ago, I decided it might be fun to do an ancestry binder for my original Amish friends as a gift, so I asked one of their grown daughters for a few names and dates—and I was off to the races doing Amish genealogy.  I was worried about a few things, though:  (a) that it would be impossible to figure out which of the many Yoders and Millers and Bontragers belonged to which family; (b) that I would find lots of instances of intermarriage, which would embarrass them; and (c) that it would be boring—after all, how many Indiana farmers could I write about before I slipped into a coma?


All of these worries proved to be unfounded.


As far as the common names—they were very creative with their first names, so that helped a lot.  In my friends’ family tree I found first names like Harley, Tobias, and Benedict.  And even if there were two or three Daniel Millers in a town, they never had wives and children with identical names.


As far as intermarriage—I was surprised how little of it I found—nothing closer than five or six generations back, and very little of that.  (How many non-Amish Americans could swear to a certainty that they are not related to their spouse that many generations back?)  What I found was that the Amish moved around more than I thought.  Most of the Indiana Amish have their roots in Holmes County, Ohio, and farther back than that, in Somerset County, Pennsylvania—but my friends’ tree contained ancestors who lived in Kansas, Maryland, Illinois, and Michigan.  Also, a number of non-Amish family lines have married into the Amish over the years (examples: Whetstone, Lambright), keeping the gene pool fresher.


As far as being boring—in genealogy there’s always something new to find, always another bend in the road...  And even the Amish have a few skeletons in their closets.  There’s “White Jonas,” for example—but that’s a story for another day.