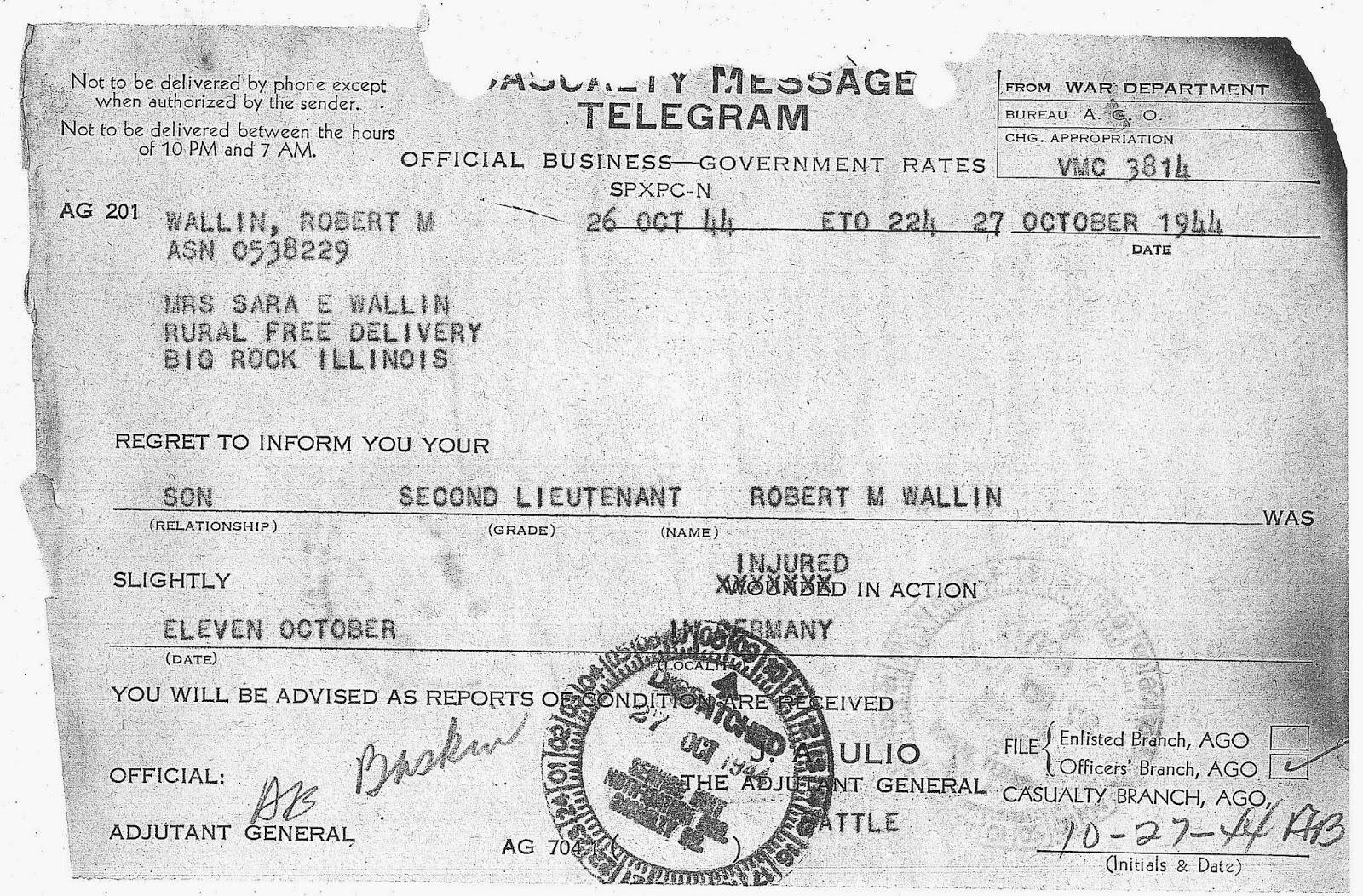 I was recently given a box of family papers by an aunt who was cleaning out her closets.  This telegram, sent on October 27, 1944 to my grandmother, was among the papers.  I am certain it was a day she never forgot.

The telegram informed her that her son, Second Lt. Robert M. Wallin, had been injured in action in Germany.  Since she knew that he was a front-line infantryman and platoon leader, she was aware that he was risking his life on a regular basis—and indeed, he had already earned one Purple Heart by this time.  But this was different; this was bad.  But I wonder—was she at some level relieved that he was, at least for the time being, headed to a hospital of some kind and out of harm’s way?

I heard my father talk about the day he was injured, and I have the letters he wrote home when he was able to write.  I also saw that, for the rest of his life, he didn’t walk quite straight, and his back sometimes bothered him.  But all Grandma Wallin knew that day was that her beloved son was hurt.

Here’s how Dad told it in an understated letter home, written on October 19, 1944:

“Now don’t get excited, I ain’t hurt.  They got tired of having me at one hospital, and shipped me back to this one, so you can quit worrying about me for a while...  All that is the matter is that my back hurts, and they taped me up and won’t let me walk around...  It has been released and published in the papers, so I can tell you I was in the Battle of Mortain in France August 4-10 (approx.)...  That was really quite a fight.  I have been in so many others since that it would take a book to tell about them.  Now that I am back where it’s safe, I don’t see how my luck ever held out.

The way I got it the other day, my platoon was shelled...  I thought they had finished, and went out of my hole to see if anyone was hurt...  Then s-s-s-s-s-s I heard it coming, and thought I could make it to a hole just in front of me.  I took 2 steps and Blam the thing lit about 20 feet behind me and exploded and blew a hole in the ground 8 feet across and 5 feet deep.  It sent me rolling, and I thought I was killed, but the concussion just hit my back.  Darn inconsiderate not to give me a little piece of shrapnel for a souvenir.”

The Battle of the Bulge happened that winter, and most of the men in Dad’s platoon didn’t make it.  Perhaps being almost killed in October and spending five months in the hospital actually saved his life!  At any rate, after he was patched together, he returned to the front lines the following March, and he later wrote this:

“You no doubt read in the papers how we spearheaded the 9th Army drive across the .  We came in shooting and they just couldn’t hold us...  [The papers] probably said “negligible opposition.”  It was, after we shot or captured everybody in our way...  Incidentally, when we crossed the , our mission was to reach and cut off the superhighway (Division objective).  It was 6 miles from the Rhine…  Our platoon was the first one in the 9th Army to cross the highway, and this bird was the 3rd man across.  (The other Lt. and one scout could run faster.)”

It’s an honor to have a hero in the family.  Thank you, Dad, for all you did for your country and for the cause of freedom in Europe. 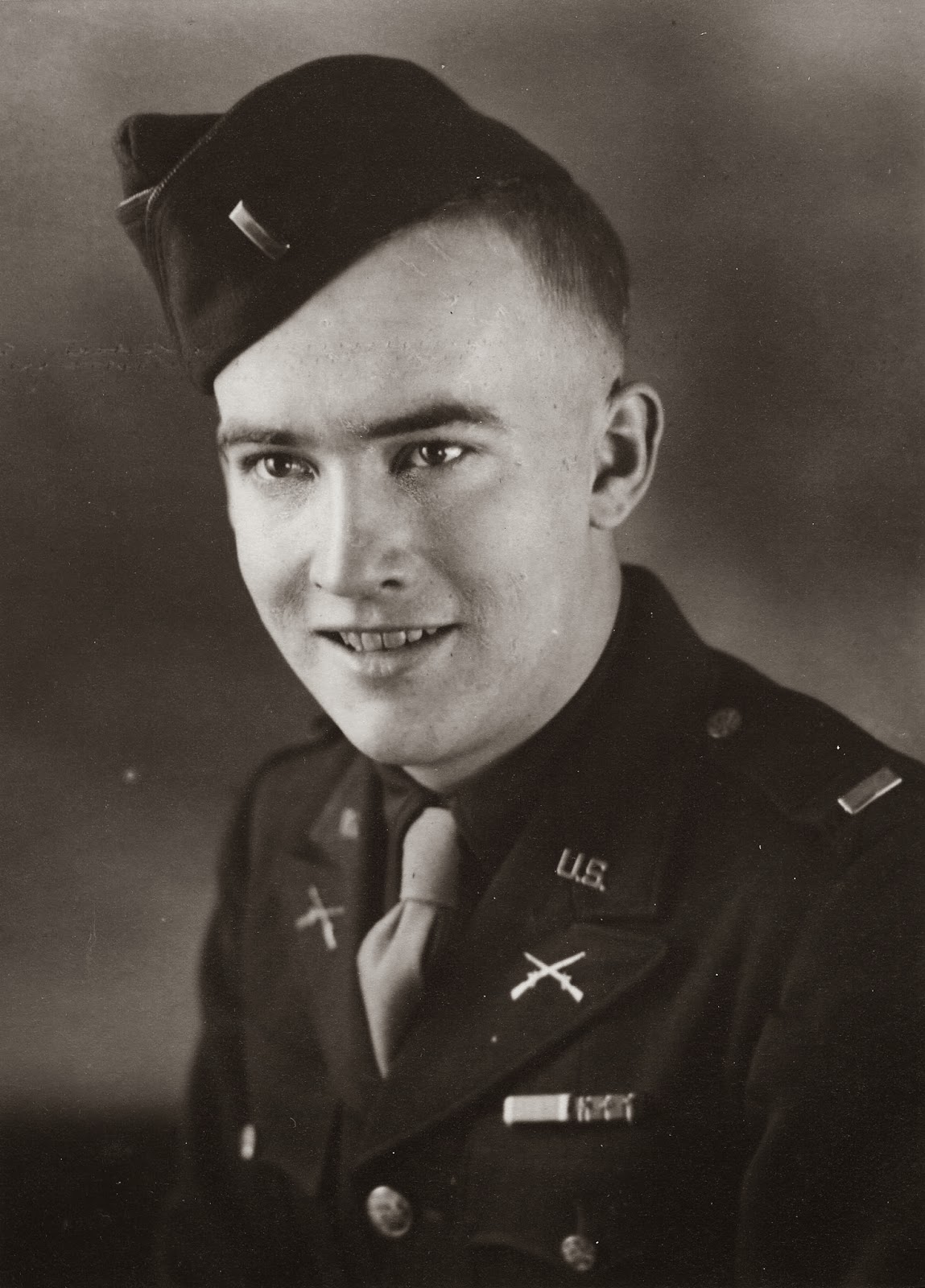