While researching the family of a client, I came across the story of Martha Boyle Oakley (1836-1920).  It is a story of overcoming hardships and making the best of the hand one has been dealt in life.

Martha’s parents, Francis Boyle and Margaret/Mary Way Boyle, died at age 30 and 32, leaving her an orphan at ten.  It was said in the family that Margaret/Mary died of “quick consumption” and Francis died soon afterwards of a broken heart.  A terrible setback for a child—but Martha found a new family.

She was adopted by William and Martha Oakley, and it must have been a close-knit family, as she married their son Joseph in 1858.  The young couple were living in Virginia with his parents in the 1860 census.  Her obituary says that “Mr. and Mrs. Oakley located on a large plantation in Virginia, but both being patriotic Yankees, left Virginia shortly after the outbreak of the civil War, leaving all their earthly possessions in Virginia.”  Another terrible setback—but they resettled in Cincinnati and landed on their feet there, although not as farmers.

Martha and Charles were materially prosperous—he being a real estate developer who, according to researcher Nathan Lehman, “established the city of Oakley, Ohio, and much around Cincinnati.”  By the time of the 1870 census they lived in Cincinnati with their four young children and a servant.  But life was not all good.  Her obituary goes on to say that she was “mother of seven children; one died in infancy.”  (That was Ella, who died at four months from whooping cough in 1862.)  Common in those days, but no less heartbreaking for being common.

Also common, but no less heartbreaking for being so—Martha’s husband Charles was said to be a drinker, and the marriage didn’t last.  Quite a setback—but Martha again landed on her feet.  By the 1880 census she is listed as married but head of household.  She lives with her six children and runs a dry goods store.  Daughter Fannie is a seamstress.

It appears that her Christian faith was a great comfort to her, and she was known in the family for being deeply religious.  According to her obituary, she was baptized at 24, and in 1884, after her separation from Joseph, the Madisonville Church of Christ was first organized in her home, with she and four of her children as charter members.   One of her younger children, Charles, later became a prominent clergyman.

Joseph died in 1893; I don’t know if they were legally married during all their years of separation or if they eventually divorced.  Martha spent her twilight years as a widow, living with her daughter Fannie in Lexington, Kentucky.  This picture of Martha, dressed in black and contemplating her reflection in a mirror, is a story in and of itself.  I wonder if she left a journal? 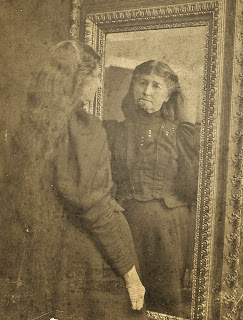