It’s always fun to find a person of historical interest in a family tree, and even more fun to find a “colorful character.”  When I decided to do an ancestry binder for my main and original Amish friends, I found a man who was both.

These particular Amish friends have a history in Lagrange County, Indiana that goes back about six generations.  Like most Northern Indiana Amish, their roots trace back mostly to Holmes County, Ohio— which is presently the largest Amish settlement in the world, numbering around 60,000.

But someone had to be the first Amishman to go west from Pennsylvania and settle in Holmes County, Ohio—and it happens that he was an ancestor of my Amish friends.  His name was Jonas Stutzman, but he was known in his later life as “White Jonas” (“Der Weiss” in German.)  Much has been written about him. 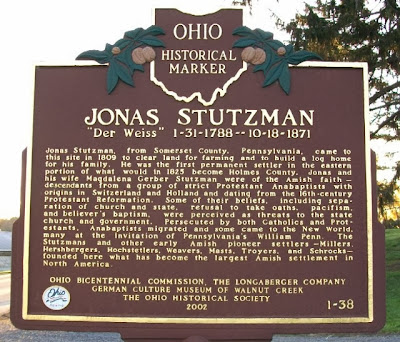 Jonas Stutzman (1788-1871) was born in Pennsylvania and came to Ohio in 1809, where he married Magdalena Gerber and had at least nine children.  The 1850 census finds him in Walnut Creek, aged 62, living with second wife Catherine and the youngest four of his eight surviving children.  According to the German Cultural Museum there, Jonas built the area’s first sawmill and the area’s first schoolhouse.

In 1850 he published a booklet in which he claimed that God had revealed to him in a vision that “the time of the fulfillment of his plan with mankind is at hand.”  He said that Christ’s second coming would be in 1853.  So sure was Jonas of this fact, and so sure that he would meet Christ personally upon his return to earth, that he built a special chair for Jesus to sit in when he arrived!  (The chair is in a museum today.) 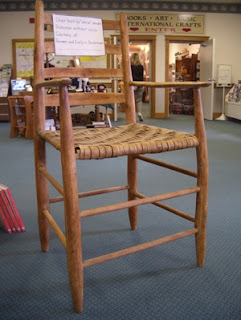 Jonas had other visions.  It was revealed to him, so he said, that the children of God should wear only beige, gray, and white—“the colors of eagles and sheep.”  Even after 1853 came and went with no sign of Christ’s second coming, he wore only white for the rest of his life.

Steven Nolt, in his book A History of the Amish, says that although the Amish church rejected his teachings, “White Jonas” Stutzman remained a member in good standing.  “His peculiar views and dress were not seen as a threat to anyone, for he never had any followers.”  The census records show that Jonas lived the rest of his life in Holmes County, residing with or near his son Daniel in his old age.

My husband and I recently had a chance to go to Holmes County and do some exploring for ourselves.  We saw the historical markers and how his memory and legacy is still honored there today.  He is remembered with displays at the German Cultural Museum and elsewhere.  His great-great-grandson, Larry Miller, dresses up as his ancestor and makes appearances and gives historical speeches about Holmes County. There is even a facebook page dedicated to him! 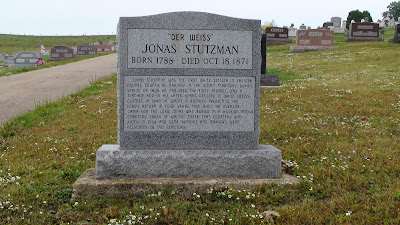