“How will our children know who they are if they do not know where they came from?”
(author unknown)

I am a fourth-generation American on most branches of my family tree.  The first of my Wallin ancestors to live in America—my “gateway ancestor”—was my great-grandfather Frederick Isadore Wallin (1849-1926)—more commonly known as “F.I.” 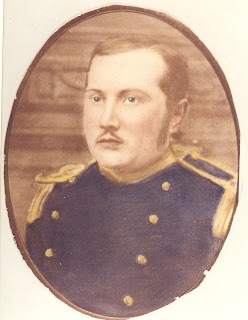 Frederick’s mother died in childbirth while having him.  In Sweden he was a tanner and the son of a tanner—one of the lower occupations on the social scale.  Yet a number of his personal papers survive, and the records say that he “read aloud well” and had a fine tenor singing voice.  He came to America (via Gothenburg, Sweden; Glasgow, Scotland; and Moville, Ireland) on the ship “Anglia” in May of 1871 at the tender age of 21; the ship’s steerage class passenger list was filled with Scots, Irish, Germans, Swedes, and a few Norwegians.  He was a lieutenant in the New York National Guard from 1874 to 1878—when this picture of him was created.  He became a U.S. citizen there and married Christine Bengston/Wennerholm, another Swedish immigrant.  The 1880 census finds them living with their baby son in Jamestown, New York, where Frederick is a store clerk.  But soon the young family went west to Nebraska, where Frederick was a peddler by trade, according to the 1885 Nebraska census.  By 1900 he is a farmer, and he and Christina have seven children—Isadore, Inez, Frederick, Ithel, Aurora, Sture, and Leonard.  Soon afterward he and Christina “moved to town” (Hordville, Nebraska) and built a store.

These words were written by his grandson Robert (my father) about Frederick’s later years:

“Old Frederick never really liked farming.  When his son Sture was 17, Sture wanted to go out on his own; so he told his father that he would finish out the year on the farm, and then help his dad build a store in town during that winter.  (This proposal was prompted by the old man telling Sture that there wasn't enough money for a new ball glove this year, while unloading a gallon of whiskey from the supply wagon.)  So they built the store, with living quarters in the back and twelve rooms upstairs, which made it a hotel.  The guests were traveling salesmen who went by train and would time their routes so as to spend an evening playing cards and having a few nips with F.I.  Let it not be thought that he was a bad man; he was a founder of the Fridhem Lutheran Church in Hordville.  This would have been about 1910, and Gramps ran the place until about 1920.  Later his son Leonard had a store in the same building, but the hotel business went out with the automobile.” 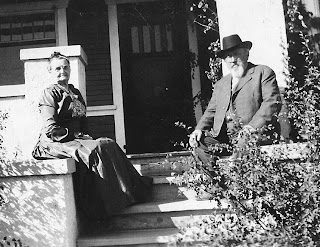