Eulogy for My Dad 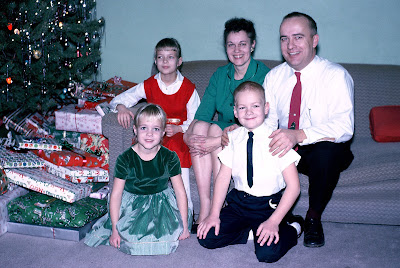 As I write these words, my thoughts are of my father.  He died twenty years ago yesterday.

Robert Milo Wallin (1923-1993) was an Army infantryman, a platoon leader, in World War II.  He arrived at Normandy a few weeks after D-Day and fought his way across Europe until, a year later, he was part of the Army of Occupation after the war.  During those terrible days on the front lines, he developed a smoking habit, as many did, to steady his nerves.  It was a habit that stuck with him all his life.  Forty-eight years after the war ended, he died of lung cancer.  He suffered greatly at the end, but he died bravely, his final word being “home.”  His faith was strong; he knew where he was going and he wasn’t afraid.

But what I remember most often are the small snippets of life… not the big moments, but the little ones.  Going on vacation in the family Oldsmobile (always an Oldsmobile), Dad wearing his special vacation baseball cap with the salmon on the front.  Dad fiddling with the cars, or making something on the grill, or mowing the lawn with his enormous old farm mower.  Dad taking us to church and always sitting in the fourth row, or serving communion with silent respect.  Dad having his customary 20-minute nap at lunchtime, on the couch, under Grandma’s afghan, nearly every day for forty years.  Dad taking photos in the old black-and-white days and developing them himself, using the downstairs bathroom as his darkroom.  Dad taking on my honors English teacher (and winning) or my physics teacher (and losing—but doing a hilarious, dead-on impression of him after he got home).  Dad at Grandma and Grandpa Wallin’s house every Friday night, lying on the couch watching TV, and then at exactly 9:00 p.m. saying, “You birds get your shoes on—it’s time to go home.”  Dad’s gigantic tomato plants, growing up the trellises that he’d made himself.  Dad talking about the war, late at night, when his guard was down and the stories came out.  The Greatest Generation, indeed.

I remember a conversation I had with my sister a few days after Dad died.  I was just 38 when we lost him, and she was 34.  We felt like we’d been shortchanged, losing him so soon.  My sister said to me, “Would you rather have had our dad for 35 years—or some other dad for longer?”  And we both decided that we wouldn’t have traded him for anyone else, even though he left us too soon.

When I started writing these words today, I said a little prayer:  “Lord, help me write something worthy.”  But I can’t wait until that happens, because it never will.  I can only try to put into words what I feel today, and hope it’s good enough.  Dad, I miss you and I always will.