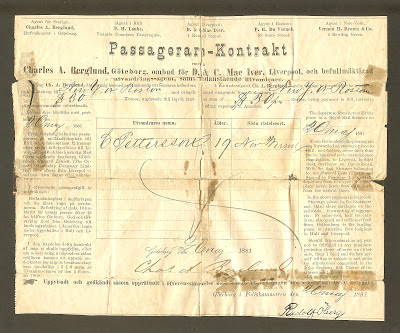 Once you become known as the Official Family Historian, a wonderful phenomenon begins to occur.  Relatives, especially older ones, begin to give you things, saying, “I know you’ll take care of this.  I don’t want it to be thrown out after I’m gone!”

My Aunt Janet recently left a box with me.  One of the items in the box was this wonderful document—her grandfather’s ticket to America.

Carl August Peterson (1861-1917) my great-grandfather, came to the United States in 1881.  He first settled in Chicago, where he had a brother, Theodore.  He married Emelia Fryksdal there, and later they went west to Nebraska.

His passenger contract, written in both Swedish and English, gives these details:

“The departure from here Goteborg/(Gothenburg, Sweden) will take place in a Royal Mail Steamer on 20 May 1881.  From Gothenburg the passengers are forwarded on steerage place to Hull, and further, never later than twelve hours after the custom house examination, to Liverpool, in third class carriages on the railroad.  With the first steamer belonging to the Cunard Line, the departure from Liverpool will take place never later than eight days from the arrival there.  In the above payment (30 kronor) is included:  Steerage place in the Steamers and third class carriages on the Railroads.  Forwarding of luggage viz: 10 cubic feet, half for children; also good and sufficient food from Gothenburg to the landing place in Amerika [and] free lodgings in Hull and Liverpool.”

Several things stand out to me:
The 1880s were a hard time in Sweden, with crop failures causing food shortages and lack of employment.  Leaving everything he had ever known must have been difficult, but staying where he was must have been the less attractive option.  So, he came to America at the tender age of nineteen, found a job in Chicago, got married, went west to Nebraska, bought some land, and worked hard… and his children became farmers and teachers and nurses and soldiers.  Carl August Peterson, an immigrant I am proud to call my ancestor. 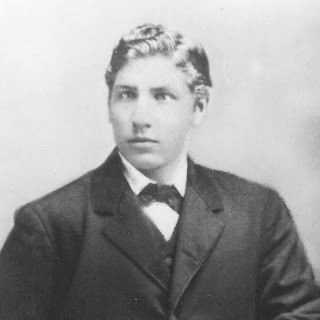