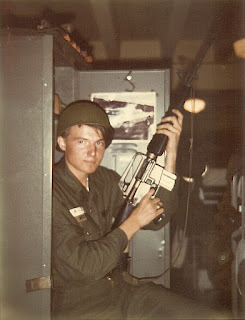 My husband, the soldier boy, 1971...  Makes it seem so real, how really young our soldiers are when they are drafted.  It was assumed at the time he'd end up in Vietnam, but he found himself guarding nukes in Germany instead - perhaps because of being hard of hearing on one ear.  God works in mysterious ways.
Posted by Susan at 7:56 AM No comments: 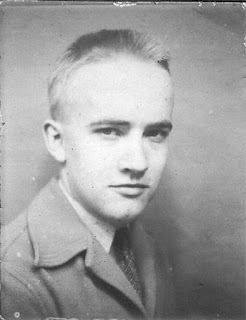 More gems from my father’s letters home during college:


On being a role model:


“I was given the privilege of being made a voluntary Civil Defense Military Instructor, to teach Boy Scouts elements of mayhem and elementary & advanced treachery.  I get a kick out of the starry-eyed respect they have for me.”


Medical advice for his mother:


By the way, Mom, what’s the matter with your back?  Old rheumatiz got ya?  Maybe you should lose some weight.  If Mrs. Lambert [my landlady] was there she’d cure you—or kill you.  She has an electric massager that she can train on anybody that complains about a pain.  I’d just as soon have a nice gentle burst from a machine gun as be on the business end of that contraption.”


And then there’s the on-again, off-again story of Bob and Betty…


“Betty and I had a big fight today.  She started it, so I’m going to let her cool her heels for 3 or 4 days.  I can get 4-to-1 odds off of anybody in the house that she’ll call up and apologize within 72 hours.  Boy, is she going to eat dirt then!”


“Betty has been very nice to me this fall, asks me to picnics, etc.  Sometimes I go and sometimes not.  I don’t give a hoot for her, but she’s a good cook, and who am I to turn down eats?”


“B. and I are all fixed up.  She was so extra nice to me last week that I decided she must want something.  So I asked her to the Military Ball (I have to go, you know), and that must have been it, since she is ornery as ever again now.”


“I am taking Betty to the Military Ball, since that will put me in good stead with Col. Murphy, who is a good friend and employer of hers...  Besides, she’s got more class than any other girl I know.  Not as pretty as Avis, though…  Also, Betty has a car.” 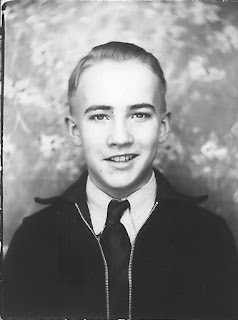 My dad, Robert Milo Wallin, would have turned 90 this coming week.  He’s been gone 20 years now—I had only 38 years with him on this earth...  His sense of humor was one of my favorite things about him.


Dad skipped a couple of grades in school, so he started college (University of Nebraska, ROTC scholarship) at age sixteen.  I have the letters he wrote home.  I can see from those letters that his sense of humor developed early.  Here are a few quotes:


On the subject of money—always high on a college kid’s list, then as now:

“I should pay my rent and those shoes I bought in North Dakota are about shot, so I could sure use a little of the ‘root of all evil’…”


And  this:   “Dad, you said to say how long before I needed money—but Mom wrote and said she was in the dough and she would heel me.  So if she gets rid of a lot of money in a hurry, you will know why.”


During a scarlet fever epidemic:

“There’s about all the room you want in the classrooms now.  Our accounting class looks like Lee’s army after the Battle of Gettysburg.”


On his personal contribution to the Cornhusker football program:

“Carl and Gomer just came in.  Gomer is considered the best freshman football prospect this year.  He’s not too brilliant—his sister and I keep him in school.  She is a nurse and furnishes the money; I am merely the invisible force that keeps his English grades up.  He’s improving, though; by the end of the semester I hope to have him where he can tell the difference between a noun and a verb.”

On trying to do his civic duty:

“I am beset by worries.  The Bandbox Laundry went bankrupt, proprietor fled town, and the joint folded up—and folded two of my best shirts with it.  The shirts are over there, but nobody has a key, and they can’t locate the proprietor.  I told the County Attorney that I would be more than happy to put a brick thru a window and walk in and unlock the door for him, but he declined my help.” 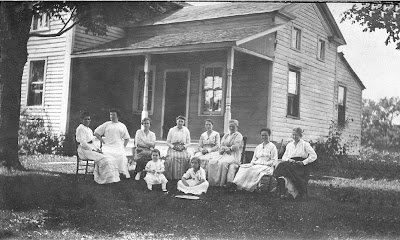 I had an epiphany this week, with the help of my co-worker Robin.  Here it is:  Ancestry binders can be wonderful gifts for those who have the memory loss that old age dementia brings.


I discussed this with Alzheimer’s expert Jo Huey via email this week.  She said this about memory loss: “It is as if one takes an eraser in 2010 and erases the information stored in the brain backwards towards 2000, then maybe even as far as 1980 or 1960 [or before]...  Because of this process, people often know a great deal about their past but know little about what happened today.  With that in mind, in order to have more enjoyable visits and to build rapport one can almost always discuss the past with them.”


My friend Robin said that the ancestry binder I did last year for her mother-in-law has become one of that lady’s greatest joys.  When she looks at the history of her parents and her grandparents from so long ago, she remembers those people!  And when reading the research I did on her ancestors, she has a framework for that new knowledge!  And when her siblings come to visit her, they look at the binder, and they share those common memories.  It gives Robin’s mother-in-law something to talk about with visitors—particularly older visitors such as her siblings—where she is on a level playing field with them.  Her memories of those early years, and the things she heard from her parents and grandparents so long ago, are still there, waiting to be reawakened—even though current events might confuse and frustrate her.


Wow!  What do you buy your aging parent or grandparent who sometimes doesn’t even remember who you are?  If their vision is good—you can give them the gift of their ancestry.
Posted by Susan at 5:43 PM No comments:

Therese Peterson: A Life Too Brief 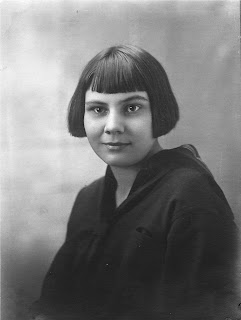 My paternal grandmother, Sara Peterson Wallin, came from a Swedish family of six girls and two boys, all long dead now.  Several of her siblings have stories which intrigue me—particularly the story of Aunt Therese.


Therese Irene Peterson, the youngest of eight, was born in 1907 on the dry plains of Nebraska, near the Platte River, where her parents purchased a farm when they came west in the 1880s.  They were Swedish immigrants with a minimal education—but like many immigrants, they wanted better for their children.  Therese not only finished high school, but was the salutatorian of the Aurora (Nebraska) High School class of 1925.  She visited Sweden with her mother and unmarried older sister when she was thirteen.  She once had the opportunity, at a local fair of some kind, to take a plane ride with Charles Lindbergh.  She became a teacher, like two of her older sisters did.

But Therese was troubled...  At one point she was sent to a hospital in Kansas that was doing groundbreaking work in the field of mental illness; that hospital was the new Menninger Clinic.


She must not have gotten better.  In 1937 she was sent east to her sister Emma, a nurse in Chicago.  Somehow Therese ended up at Elgin State Hospital, a mental facility (“asylum” as they used to be called) near where I grew up in Illinois.  Even in the 1960s, when I was young, that place was reputed to be scary and medieval; I can’t imagine what it was like in 1937...  What little I’ve read gives me nightmares.


Therese didn’t last long there...  Within a month she was dead at age thirty, and her body was sent home to Nebraska for burial.


As I grew up in the 1960s, the story was that she died by starving herself to death—“anorexia” as we would call it now.  She was held up to me as a warning whenever I wouldn’t “clean my plate”—and since I was painfully thin for my age and a picky eater, I recall hearing the words “Aunt Therese” being whispered behind my back quite often, when the grownups thought I couldn’t hear them.


I ordered Aunt Therese’s death certificate recently.  I was shocked to find out that she died not of starvation, but of bacillary dysentery—caused by filthy drinking water, most likely, and a disease which was uncommon in the civilized world by 1937.  It would have been a terrible way to die.  What a tragic end to an all-too-brief  life.


I think of her sometimes and wonder how her life would have turned out, had she lived longer.  I wish I could have known her.  I wish someone could have helped her.
Posted by Susan at 10:28 AM No comments:

I’ve been thinking a lot about genealogy lately.  (In other words, it’s business as usual.)  And I’ve come up with my own Genealogist’s New Year’s Resolutions for 2013.  It’s ‘back to the basics’ for me.


First:  I am going to spend more time talking to the senior members of the family while I still can.  I wish I’d done this while my father was still alive.  It was important—but alas, it wasn’t urgent—and then he was gone.  It seems like a lot of genealogy buffs were first inspired by the death of a loved one and their regrets about letting so much history slip away.


Second:  I am going to keep better track of where I found stuff.  Too often I’ve made wonderful discoveries—and in my excitement, I didn’t document my sources well enough.  Then when I needed to compare conflicting information, or go back for more details, or prove to some smarty-pants that I knew what I was talking about—I was unable to retrace my steps.


Third:  I am going to share more.  In genealogy, as in life, you often receive with the same measure with which you give.  The more I reach out, the more I meet people who are interested in the same families as I am.  Also, I’m going to make more posters, scrapbooks, binders, and online albums to share with family.  Why do all this research if I’m just going to keep it to myself?


Fourth:  I am going to contact libraries and historical societies more often.  The internet can get me only so far, and ordering vital records can stretch the budget.  So I have to remember there are other options.  Recently I contacted some libraries and historical societies in Ohio and out west—and for the cost of copies and postage, I got more information than I ever dreamed of.


Fifth:  I am going to try harder to break into the Amish market.  Maybe it’ll be easier when I live among them, as we hope to do after we retire…  But what little Amish genealogy I’ve done (three binders for Amish friends as gifts) I have enjoyed so much.  I thought Amish genealogy would be boring—farmers, farmers, farmers, with never a scandal to break the monotony!—but I was mistaken.  It has its own charm.


I wonder what other genealogists are resolving to do in 2013?
Posted by Susan at 7:00 AM 2 comments: