Ft. Benning, – School - Part Two
Fall 1943 – excerpts from several letters
Those who made it to graduation became commissioned officers. 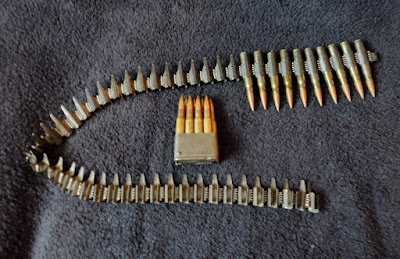 We were firing machine guns on the range today when they gave “cease firing” -- “unload” -- “clear guns” -- “atten-shun” -- “about face” and then they read us about Italy’s surrender.  It drew a good hand.  Most of the fellows here are married or engaged and don’t want to go across.  (Not that I don’t want the war to be over, but I want in it.)

I’m still here and everything’s under control for the time being.  They kicked out 55 more men today, so our ranks were thinned a little...  Now when I get kicked out I’ll at least know some darn good men went before I did...  They tell us they’d rather kick out 5 good men than let one through that wasn’t a perfect combat officer.

I’ve gotten 2 letters from [my sister] Helen.  I think she writes because she’s a little homesick and wants letters.  Be sure to write her even if you have to neglect me to do so, as she’s young and a girl, and has absolutely no acquaintances there...  I sent her ten bucks.  I told her it was her own, and to do as she pleased with what I sent her, so if you can afford it, just pretend I’m not sending her any, and then what little I send will be extra.

Nobody in our class has been hurt to speak of.  I got stabbed a little (don’t get excited) the other night.  A messenger and came down a path where I was fusing some mortar shells, and his bayonet caught the side of my helmet and glanced off and cut a little gash...  I bandaged it with a piece of tape and it’s all healed up now.

The dangerous part of this course is about over.  We didn’t have a single accident on the mortars.  They had been having quite a run of bad luck, but guess we broke their jinx.  Everything that happens here doesn’t make the papers.

Only 4½  weeks to go until I know one way or another about this deal.  Commission or no commission, they’ve made a man of me down here.

(Note:  He did graduate from Officer Candidate School, and was commissioned as a 2nd lieutenant.)


To read all nine parts from the beginning, click here.