I’ve been working on a project lately, for my first client from the great state of Alaska.  No ancestry binder for this client—it’s all being done online—just growin’ an online tree.

And I am telling you, this tree is a gold mine!  I have never seen a tree so rich with information…  His ancestors were in the United States so far back in time, on so many branches of his tree, that researching it is like Ancestry Disneyland!  One of my favorite finds has been his Aunt Maggie and Uncle John.

I was tracing a line on his maternal side and came a across a great-great-grandfather who has my favorite name in this tree—Willis Woody Corn.  Willis and his wife had a number of children, including Mary Elizabeth, my client’s great-grandmother.  But Mary Elizabeth had a sister—Maggie—with an interesting story.

Maggie was born May 15, 1885 in Kerrville, Texas, the seventh of ten children of Willis Woody Corn and Susannah Covey Corn.  The 1900 census tells us that by the time she was fifteen, the family had moved to Bonito, New Mexico (now under 75 feet of water because of the Bonito Canyon Dam), where her daddy was a farmer.

Somewhere around this time, she met John Franklin Greer.  According to a biography by C.W. Barnum on nmahgp.genealogyvillage.com, John had just come from Pecos, Texas, tarrying there after his family moved to New Mexico to close up his father’s hardware store.  He also kept busy working on his gambling skills—which became his chosen career path. 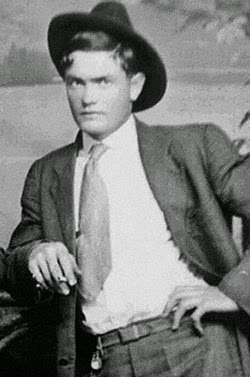 John left Pecos in a hurry after a gambling dispute led to gunfire.  Two angry card players followed him from Texas towards New Mexico Territory, but he ambushed and killed them both along the way.  He arrived in Bonito soon afterwards, and began a life of gambling in the boom towns in the area.  Somehow he and Maggie met.

Maggie was married to John at the tender age of sixteen, in January 1902.  Ten months later she had the first of their six children—four daughters and then two sons over the next eight years.  Perhaps life was reasonably quiet for those years, although I wouldn’t bet the farm on it. 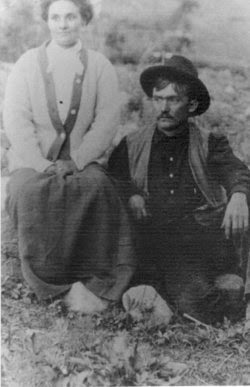 After some trouble that resulted in a shootout in the spring of 1910, John headed for El Paso, Texas, where he graduated to robbing trains with his brothers and his friend John Gates, who were known as the Greer Gang.  He hid out in Mexico for a while (even joining the Mexican Army of Revolution).  Eventually he ended up back in New Mexico, where he resumed his career of robbing trains.  But when he walked into the jail in Deming where his friend John Gates was being held, stuck a gun Sheriff Dwight Stephens’ face, and freed his friend, the end was near.  Sheriff Stephens formed a posse and a week later, he cornered the Greer Gang in a steep canyon called Sandy Draw.  John walked out and pretended to surrender, then shot both his pistols from the hip, killing two deputies.  Moments later he was dead in a hail of gunfire at age 30.  The inscription on his grave says “beloved son.”  Was he also a “beloved husband and father”? 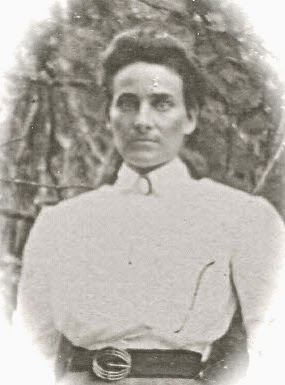 From what I can see, Maggie didn’t remarry for twenty years.  Why was that?  Was she grieving for her husband?  Was she afraid of getting her heart broken again?  Or was she just fed up with men?  At any rate, in 1932 she and Clyde Lee Thompson were married in Hurley, New Mexico.

Clyde passed away in 1940.  Maggie died in 1945 and is buried next to him at Memory Lane Cemetery in Silver City, New Mexico.