I don’t think much about tuberculosis (known as “consumption” in the old days)...  But my Great Grandpa Charles Erickson and his wife Lena had far too much familiarity with it, since it killed three of their adult children—Mina, Edward, and Tecla—as well as several of their grandchildren. 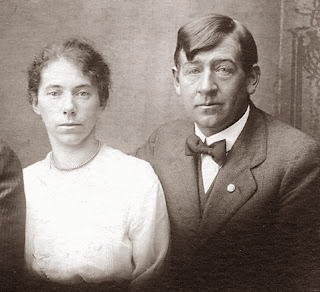 Charles and Lena Erickson’s oldest daughter Mina married  George Edward Lehmann around 1900; I’m not sure when this photo of George and Mina was taken.  Mina, it is said in the family, contracted the disease as a young mother, but refused to go to Edward Tuberculosis Sanitarium in nearby Naperville, Illinois (now Edward Hospital), not wanting to leave her children.  Tuberculosis ended her life in 1924 at age 42.  Three of her children caught it, probably from her, and two of them (Howard and Hazel) died from it a few years after their mother did.  My mother once told me that the third child, a son, survived after aggressive treatment of some kind.

It is said in the family that Charles and Lena’s son Edward also died of tuberculosis, in 1916.  Charles and Lena’s daughter Tecla contracted it as well, dying in 1937, and giving it to her married daughter Vera, who died at a tuberculosis sanatorium in Minnesota in 1945.  A survey of available records seems to bear all of this out.

I wanted to know more about this disease that took such a toll on my grandfather’s siblings. Was it really so contagious, and was it truly still killing people in the 1940s?

I started at the American Lung Association website at www.lung.org.  I learned there that tuberculosis, or TB, is spread through the air.  When a person with TB coughs, laughs, sneezes, sings, or even talks, the disease can spread.
It also said this:  “It is not easy to become infected with tuberculosis.  Usually a person has to be close to someone with TB disease for a long period of time.  TB is usually spread between family members, close friends, and people who work or live together.  TB is spread most easily in closed spaces over a long period of time.”  That explains why those with TB were sent to live in sanatoriums until they recovered!  Indeed, it would have been easy for a mother to give the disease to her children.
I learned on the website News-Medical.net that the disease has been with us since ancient times.  The concept of separating TB patients from the general population in sanatoriums began in the late 1800s.  Sometimes rest and improved nutrition brought about a cure.  Although a vaccine was developed in the 1920s, it apparently wasn’t widely used, and there was little else that could be done until the advent of the antibiotic streptomycin in 1944.

As for the family tradition that one of Mina’s sons was treated aggressively for the disease—News-Medical.net said this:  “Before antibiotics were found effective against tuberculosis, surgical treatment of tuberculosis was common and often lifesaving.”

Typhoid, whooping cough, tuberculosis—all are diseases I’ve seen repeatedly in my family tree.  So many died before their time, in days gone by!