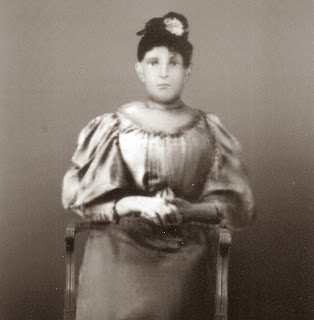 My husband’s grandmother, Eliza Carriveau Mosey, was one of a large family of French-Canadians.  I have discovered plenty of good stories in that family that beg to be investigated and told.  This one is about Eliza’s older sister Josephine, shown here at age sixteen in a much-repaired photograph.

Josephine Carriveau was born in Huron County, Michigan in 1879.  She was one of eight surviving children of Laurent (Larry) and Eugenie (Annie) Corriveau, who spelled their name “Carriveau” after coming to Michigan from Quebec.

Josephine married very young, as did several of her sisters.  Her husband-to-be was a widower named Michael Legue, who also went by the alias “Mitchell Labute.”  He was a Civil War veteran and 42 years her senior!—he was 58 when they married, and she was just 16.  They were married in 1896 and Josephine had her first child that same year—a daughter who died.

About 1908 Michael’s young nephew, Andrew Scram, joined the family.  Andrew was a 38-year-old widower—closer to Josephine’s age.  He had been married to a woman named Clara Smith, and they had three children together.  According to family sources, Clara was found dead in a field near their home with a shotgun by her side—an apparent suicide.  Andrew parceled out the three children; one went to a relative and the other two were taken in by a neighbor (one of those two died as in infant, but the other survived to adulthood).

In the 1910 census we see Andrew, a sailor, living with Uncle Michael and Aunt Josephine—and he must have settled in well, because there he is again in the 1920 census, and again in 1930.   Josephine continued to have children throughout this period, even as her husband grew older…  Michael was 85 when she had her last child, Albert, in 1922.  This picture shows Josephine and her husband Michael in 1927. 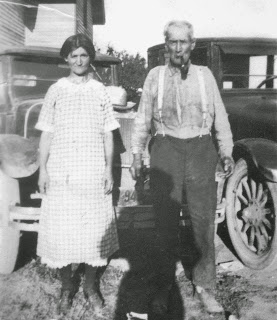 Josephine, according to the 1940 census, had only a second grade education.  I heard this story from her granddaughter Diana:  “Grandma Josephine did not understand the monetary system, such as that one 10-dollar bill has the same value as ten 1-dollar bills.  She sold a cow one time for $40 and the man handed her four $10 bills.  Grandma thought he was trying to cheat her and refused to take it.  She wanted forty $1 bills.  Fortunately for Grandma,  he took the time and effort to drive to the bank, exchange the four $10’s for forty $1 bills, and drive back.  At that point she was happy and the sale took place.”

Michael Legue died in 1930, and Andrew and Josephine lived together as man and wife after that, for the next 33 years.  Family sources tell me that they remember Andrew well—the two of them are shown in this photo, with one of Josephine’s sons  and a grandchild—and  Uncle Andrew was always called “Uncle Happy” within the family. 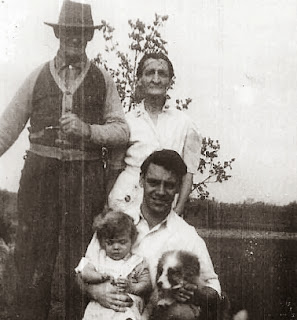