Excerpts from the childhood of my mother-in-law, Donna Garver Mosey, in her own words: 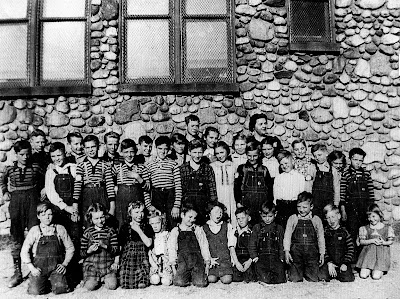 “At school we had a recess at 10:30 and 2:30, and a one-hour lunch break at noon.  Reading was my favorite subject.  I remember what an awful time I had with long division, though!  I could do short division, but not long…  We played anti-over, where we threw a ball over the school house, and “ducky on the rock.”

I loved to read; I devoured any books that came into the house—books, magazines, my sister Doris’ True Stories and Modern Romance, Reader’s Digest if I could get them, the newspaper if the store man saved it for us, anything I could get my hands on… There wasn’t any library that I remember.   I could spell in those days—not so good now—because we had “spell-downs” on Fridays third quarter after recess, quite often.

I was terrified of speaking in front of people.  Old Mr. Robinette, even though he burned down the barn at The Grove, was still our friend—he was a shirt-tail relative on my mother’s side.  One time they were at our place, and I had a Christmas program coming up, and I had a part, and I was afraid.  He said, “If you get up there and only look at me, you won’t cry.  And if you say your part, and you don’t cry, I will give you a dime.”  And I did it!

We bought flour in 25-pound bags, or took our own wheat to the mill to be ground.  Mom would make 10 or 12 loaves of bread at a time, in round pans—she could only fit four at a time in the oven.  The recipe was simple: yeast, water, sugar, flour.  Our stove was wood-burning cook stove with a wood box nearby.  Mom was a good cook and a good baker.  She would make pies on Sunday while we were at Sunday School.  We had a few chickens, and she would make egg noodles.  When we had noodles, they were homemade with about a dozen whole eggs and flour and salt.  They were really a treat with chicken and broth!

We didn’t get too many invitations to eat at other people’s houses—there were too many of us to feed!  But my childhood was a happy time, as I recall it.  We didn’t know how others lived, and it didn’t matter.

I remember laundry days.  Mom had a washboard, two tubs, and a boiler for whites—no washer or dryer.  She had to pump the water (kitchen pump), haul it to the stove, heat the water, fill the tubs, and scrub the clothes by hand.  She would start the laundry on Monday morning and not finish until Wednesday morning.  I remember her hands were raw and her fingers were bloody by the time it was finished…  I don’t know why, but we used to beg her to let us help her scrub the socks!  We would hang clothes outdoors to dry (even in winter)—they were freeze dried, but they smelled heavenly…  Ironing was a family thing.  The experienced ironers would do shirts and dresses, and the beginners would do hankies and pillowcases.”