The Nortons of Miami Beach

One of my recent clients is a Miami native—and I mean native.  Her father’s ancestors have lived in the Miami area since it was nothing but orange and lemon groves—and her ancestors planted some of those.  Her great-grandparents were Edwin and Caroline Norton (pictured).  A page from their family bible and a few old family stories began my look at the Nortons, and a bit of research filled in the rest. 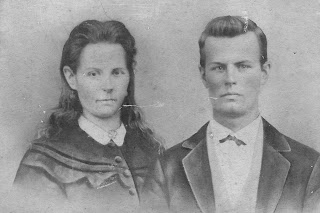 Edwin Blake Norton and Caroline Francis Kraker were married in Florida in 1872.  They lived in Bay Lake by the time of the 1880 census, where E.B. may have taught school.  By 1894, they were tending orange groves in Kissimmee and welcoming their eighth child, a daughter named Francis.  But Caroline’s death, followed by a freeze that destroyed the orange groves, meant Edwin had to start over.  By 1900 Edwin moved with his younger children to Miami Beach, eventually moving in with son William, where Edwin died in 1918.  A picture survives of William’s home on 1228 Collins Avenue—today the site of the Hotel Impala. 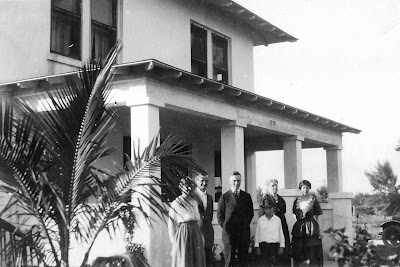 But what of the widower Norton’s eight children?

·       William Eubanks Norton became a public servant, and a good one.  He was Dade County Deputy Circuit Court Clerk, among other things, and he did his job so well and faithfully that at his death he was called “The Grand Old Man of the Courthouse.”

·       Edwin Massa Norton was nicknamed “Doc” because of his career as a pharmacist. He was said to be a kind and gentle person and a good family man. He married Elizabeth Miller and had five children.

·       Penny married William C. Lightsey.  It is said in the family that W.C. was a member of the posse that went after the legendary Sam “Sure Shot” Lewis, an infamous Miami saloon owner who killed two men in 1895.

·       Lewis Greenwood Norton worked in the Dade County Tax Assessor’s office but was best known for his long litigations with the City of Miami Beach over a piece of land he tried to obtain title to as a homesteader, and upon which he lived from 1917 to 1926.  He died in 1930 at age 51 from “an attack of acute indigestion.”

·       Julia married James S. Peters, an early Miami pioneer who came to the area in a horse and wagon in the 1890s, became a tomato farmer with his brother, and lived in a town there (Peters) which was named after his family.  Julia died at age 95 in Miami.

·       Louise (Lula) married Lemuel Bowers and lived a quiet life.  She had five children, married twice, and died at 82.

·       George Cason Norton was a sergeant in the U.S. Army in WWI and a druggist by occupation.  He married Julia Kimbrell; they had just one child, George Jr.  It is said in the family that he died after being hit on the head during a robbery.

·       Francis was the baby of the family.  Her mother died shortly after her birth, so “babied” was exactly what she was, by her seven older siblings.  As an adult her husbands weren’t always so willing to make her the center of attention...  But eventually she found her soulmate, Roy Crews; I talked about him in another story.

The Nortons made their mark on Miami, and many of their descendants still live there today.  I guess that’s what people mean when they say “roots.”
Posted by Susan at 5:17 AM