Big Sister Without a Name 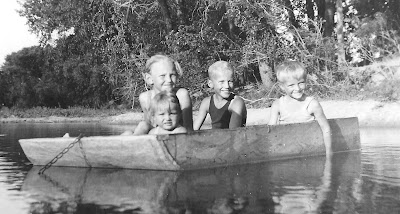 My father, Robert Milo Wallin (1923-1993) spent nearly all of his life thinking he was the oldest child in his family.  But things aren’t always what they seem to be, particularly in genealogy.

From early childhood, a big part of Robert’s identity was his position as oldest child.  He was a typical firstborn—responsible, mature, hardworking, serious—a liaison between the adults and the younger kids, trying to set a good example.  (Those of you who are firstborn, as I am, know what I mean.)  He went off to World War II, writing letters home to his parents and younger siblings—reassuring his parents and sisters and trying to keep his brother from ending up on the front lines like he was.  (A story for another day.)

The years went by, until Dad was a businessman in his sixties, applying for a passport so he could attend a conference in London.  Part of the process was obtaining a certified copy of his birth certificate—and when it arrived, there it was in black and white:  “Number of children of this mother born alive and now living -1.  Born alive but now dead -1.” 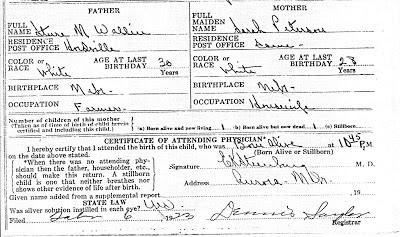 Dad then remembered hearing long-ago whispers among his aunts about a baby girl who died.  And suddenly he understood the likely reason his mother went to a hospital when he was born (and a good thing, since he was a breach birth).  Why hadn’t his older sister ever been talked about openly as he was growing up?  Why wasn’t she remembered, and mourned?  Probably because it wasn’t the Swedish way to “dwell on the past” or “stir up sad memories.”  So, Dad let it lie, and now he is gone, too…  Recently I decided it was time to find out more, if I could.

Although my father died many years ago, his youngest sister is still alive.  I asked her what she knew about this mysterious child, and she said that she had heard whispers, too—but she had always been too hesitant to bring up the subject with her mother.  She asked that I let her know what I found out.  It seemed like I wasn’t the only one who wanted to know more.

Then I went to my favorite resource for vital records info and followed the instructions for obtaining old Nebraska birth and death records.  No luck there, however.  I was told that neither event was recorded—or if they were, the records are lost now.

I wish I could have discovered more about this little baby girl, who was my aunt.  But this is one sad event from long ago that seems destined remain a mystery.