Grave Hunting in the Heartland

It was my Grandma Wallin who first took me to a graveyard—as a recreational activity—when I was about eight. I’ve liked graveyards ever since.

Recently my husband and I were traveling to Holmes County, Ohio, and I thought we might as well visit a few graveyards on the way. His maternal ancestors are buried in a string of graveyards stretching from northern Indiana to central Ohio. So, armed with my “graveyard kit,” we spent a day hunting tombstones.

First stop: Eddy Cemetery, DeKalb County, Indiana—resting place of Charles and Elizabeth Alwood, my husband’s great-great-grandparents. Charles was a private in the Indiana Volunteers during the Civil War. He left seven children at home, the oldest a boy of twelve. His unit fought its way through the south, eventually ending up in North Carolina, where they occupied Raleigh and then cooled their heels waiting for the war to end. After it did, but before he could get back home, Charles died of typhoid in an army camp there. Elizabeth lived forty more years as a widow, running their farm as well as she could. We left a flag at his grave. 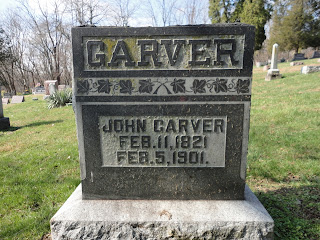 Second stop:  Independence Cemetery, Defiance County, Ohio—resting place of John Jr. and Mary Ann Garver, my husband’s great-great-grandparents.  There we had the great pleasure of meeting up with the woman who cared for this church cemetery along with her husband.  We had corresponded with her ahead of time and determined that her husband is a distant cousin of my husband, and she surprised us with an envelope of photographs which were ours to keep. 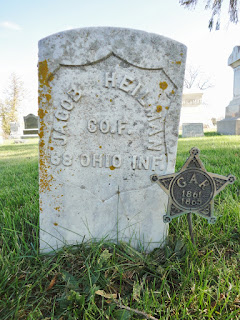 Third stop:  Florida Cemetery, Henry County, Ohio—final resting place of Jacob Heilman and his family—once again, my husband’s great-great-grandparents.  Jacob, an immigrant from Bavaria, was in the 68th Ohio Infantry in the Civil War, and theirs is an incredible tale.  His unit fought in every Confederate state except Florida and Texas, and during the course of the war, he marched over 7,000 miles and rode trains or steamboats another 6,000.  He lived to tell the story, going on to have twelve children—six before the war and six after—and he died at 88.  After taking some photographs, we put a flag on his grave and were on our way.  We had a long drive to our next stop. 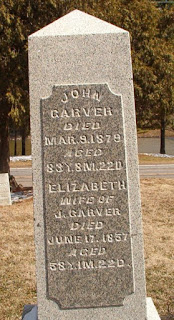 Fourth stop:  Walters Cemetery, Morrow County, Ohio—final resting place of John Garver Sr. and his wife Elizabeth—my husband’s great-great-great grandparents.  John Sr. was born in 1795 and died in 1879.  He fought in the Pennsylvania Militia in the War of 1812, and was given a 40-acre piece of government homesteading land (“bounty land”) for his service and a pension in his old age.  Three of their daughters predeceased them and are buried with them—all three died in the 1840s, at ages 20, 16, and 2.

Not every husband would spend an entire day finding cemeteries and cleaning gravestones for his wife, especially on vaction...  Kudos to mine for being such a good sport!