Mystery Monday: George Wendell Phillips - the Rest of the Story

A few weeks ago I wrote a post about George Wendell Phillips, and I was full of questions.  Thanks to two readers (kudos, Deb and Lindy!) and some further digging, I now have some answers.


To recap, George was born in New York in 1887, and by 1920, he had met and married Francis Norton of Miami, Florida.  They had a daughter in 1921 and a son in 1924—by which time George was off the radar, never to be seen or heard from again—at least, not by his wife and children.  A granddaughter hired me to find out more.


We will probably never know what caused the split between George and Francis, but we now know much more about George’s life around the time they met and married, and in the years after they split.  It turns out that George was in the U.S. Marine Corps and was stationed at the air field at Miami, Florida—thus answering the question of how he and Francis met. 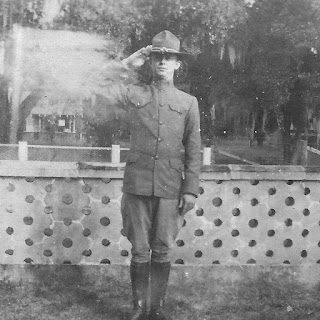 After their wedding in 1920, they made a trip that spring to visit George’s mother in New York.  She was a widow who had remarried by then and moved from Salamanca to North Tonawanda.  Her new husband, J.J. Patterson, was a wealthy man, and they had a houseboat on the Niagara River.  In 1921 a daughter was born to George and Francis in Pennsylvania—how they came to be there remains a mystery.  By 1924 they were back in Miami—and Francis was the single mother of a daughter and a new baby son.


We now know that George stayed in Florida for at least a few more years; he appears in various records there until about 1929.  After that, he apparently moved back to New York, living in various places, working as a hotel cook.  By 1938 he was living in the Veteran’s Hospital in Bath, New York, where he died on March 2, 1941 of pneumonia.  His death certificate says he suffered severe bronchial asthma (as does my client), and also heart problems (which also run in her family), and he’d had at least one heart attack by the time he died at age 53. 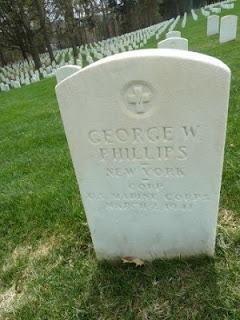 George evidently never remarried or had any more children; and by the time he died, his parents were both gone, as was his only sibling, a twin who died at one year of age.  George was buried at the Bath National Military Cemetery, probably unmourned and unremembered—until now.  My client says she hopes to travel to New York and place a flag on his grave.  That, dear readers, is what we call “closure.”
Posted by Susan at 6:00 AM