I wish I had a Civil War veteran in my family tree!...  But my ancestors came from Sweden and Germany quite a few years after the Civil War ended.  My husband is more fortunate in that regard—I’ve found two of his direct ancestors who fought for the Union.  But one of my clients turned out to have four!  Peggy (not her real name) hired me in 2011 to do a binder on her mother and a binder on her father. 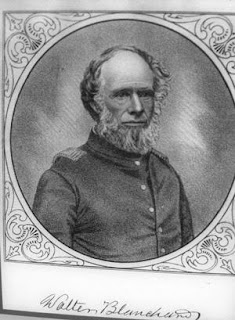 ·       Walter Blanchard (1807-1863), pictured above, was a probate judge who fought in the 13th Illinois Infantry, rising to the rank of Captain.  He was fatally wounded in Georgia during the Battle of Ringgold Gap in November 1863, and he died seven days later.  He is buried in Downers Grove, Illinois.


·       Charles Carpenter (1833-1910, not pictured) also fought in the 13th Illinois Infantry as a private.  At the Battle of Chicasaw Bayou he was captured by the rebels when his unit was ordered to retreat, but he was too far forward to hear the command.  After his release he returned home to Illinois to marry his sweetheart—then returned to his unit to serve out the rest of his three-year term of enlistment. 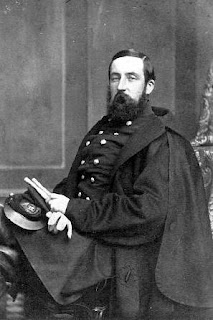 ·       Arthur Ducat (1830-1896), pictured above, was an Irish immigrant, but better educated than most.  He was a civil engineer before the war, whose hobby was to read every book he could find on military science and the art of war.  (Source:  Biographical Sketches of the Leading Men of Chicago by Carbutt & Meredith.)  When war broke out, he volunteered in the 12th Illinois Infantry and eventually rose from the rank of private to the rank of Brigadier General.  He was said to be an excellent soldier, organizer, tactician, and negotiator.  After the war he became a very successful insurance agent and authored a book on Fire Underwriting.  Arthur outlived his first two wives, and had children with all three. 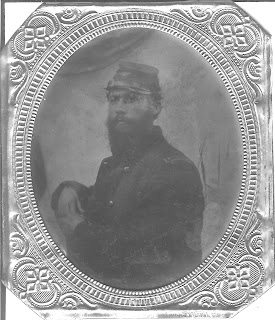 ·       James Edward Larkin (1832-1911), seen in this tintype,  rose to the rank of Lieutenant Colonel in the 5th New Hampshire Infantry.  His unit fought in some of the worst battles in the war, including Antietam, Chancellorsville, Gettysburg, and Cold Harbor.  Somehow, he survived his three-year enlistment and went home to his trade as an ornamental painter, and he later became the local postmaster.


What a wonderful heritage!  And how fortunate that so many records are online for me to find!
Posted by Susan at 5:00 AM