The Two Wives of Thomas Garver

Thomas Garver (1850-1902) was farmer in Defiance County, Ohio. According to notes taken by his great-granddaughter Ruth Marie Burkhart in 1943 for a school project, he had a sideline as well. She wrote, “He was a preacher of the United Brethren Church located at Ridgeville, a small town a few miles from Napoleon [Ohio]. He lived on a small farm near the church. He farmed and did odd jobs through the week and then on Sunday he gave his sermon.”

In 1873 Thomas married Mary Ann Heilman, a local German girl, and soon they had three sons named John, Ulysses, and William. None of the three boys survived long, however, Ulysses dying shortly after birth in 1876 and the other two boys in 1878; a typhoid epidemic that year may have been the cause. But soon afterwards daughter Amelia was born, followed by Ellen in 1882.

By 1884 their life together was drawing to a close. Mary Ann passed away at the age of 31, leaving two little girls without a mother. Son Floyd later remarked to one genealogist in the family that Thomas had a hand in his first wife’s death—but there is no evidence to support that claim, and family members say that Floyd was known for his tall tales. Mary Ann’s obituary says “consumption” [tuberculosis]—that we know for sure. 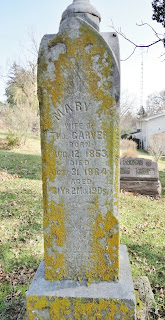 The grieving widower soon found comfort, however, in the arms of Mary Ann’s younger sister Ellen, and Thomas married Ellen in 1885. I wonder what Mary Ann’s parents thought? And what were their other sisters’ feelings about it? Did they think it was romantic, or just disturbing? Were they happy for their brother-in-law, or did they feel like Ellen was betraying her sister’s memory? Did young Ellen have a secret crush on her brother-in-law all those years? (She was eleven when her sister married him.) Or did she have a sisterly bond that blossomed into love as she comforted the grieving widower? Or did she marry Thomas because she felt sorry for the two little girls, who were her nieces? 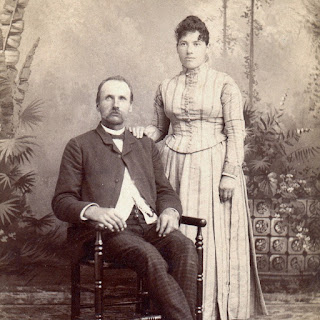 Ellen outlived Thomas, who died at age 52 from heart trouble, and she relocated to Michigan. But all three are buried together at Independence Cemetery in Defiance County, Ohio—Thomas and Ellen together, with her sister Mary Ann nearby.
Posted by Susan at 9:00 PM