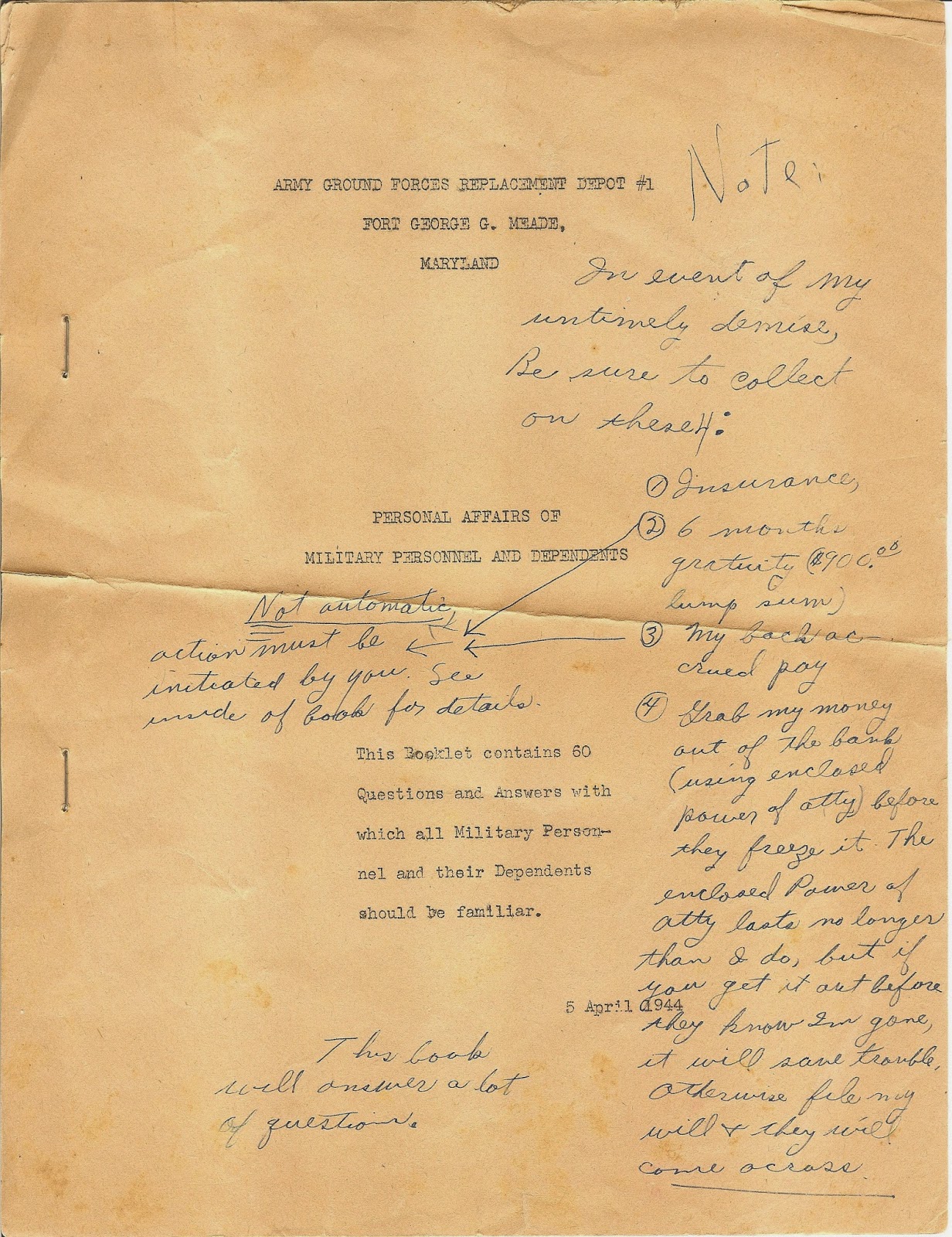 After my father’s death in 1993, my sister and I sat on the floor of the living room one evening, going through boxes and drawers of his military papers, deciding what to keep.  We found a booklet entitled “Personal Affairs of Military Personnel and Dependents”—this is the front cover.  There are some notes in my father’s handwriting, which read as follows:

“Note:  In [the] event of my untimely demise, Be sure to collect these 4:

3.  My back accrued pay.  (2. and 3. Not automatic—action must be initiated by you.  See inside of book for details.)

4.  Grab my money out of the bank (using enclosed power of attorney) before they freeze it.  The enclosed Power of Attorney lasts no longer than I do, but if you get it out before they know I’m gone, it will save trouble.  Otherwise file my will and they will come across.

This book will answer a lot of questions.”

I guess this is consistent with the fact that Dad was a business major in college before the war!

The booklet had three pages of information about his final wishes and was meant to be left with his next of kin—in his case, his mother.  In my imagination I am picturing a roomful of recruits, headed for overseas, sitting at tables and filling in this booklet, thinking about their own deaths possibly for the first time, as it sunk in that yes, they were headed for the front lines of what we now call World War Two and might never return.

Page 1 gives basic information, including that he is 21 years old.  He carries $10,000 of life insurance, payable to his mother Sara, with his father as Contingent Beneficiary.  (That’s the equivalent of about $133,000 today.)  This optional insurance cost him $6.50 a month out of his pay—but his parents were not well off financially, and that money would have meant a lot to them—a chance to buy their own farm instead of renting, for example.

From his army pay of $150 per month (about $2,000 today), he had $50 a month sent to his bank at home, and another $18.75 taken out to buy War Bonds.  The booklet said, “If I am reported missing, missing in action, interned in a neutral country, or captured or besieged by enemy forces, the allotments out of my pay for insurance and support of my relatives will be paid by the government for 12 months.”

Page 1 of the form goes on to say that Dad had executed a will and Power of Attorney and mailed them to his father in Big Rock, Illinois.

Page 2 has blanks to fill in where he might have a Safe Deposit Box, where he left personal papers, and what debts he owed (none).  Then it says, “If I die in the line of duty, from wounds, or illness, or other causes, I have designated [here he filled in his mother’s name] as a dependent to receive  the six months’ gratuity pay awarded by the government.”  Dad hand-write off to the side, “$900.”  It then had a place for the soldier to list where they had bank accounts.

Page 3 gets even more “real.”  It says, “I desire that my permanent place of burial be at ________.”  (Dad wrote in, “No Preference.”)  It goes on to say, “If I die abroad, my remains will be returned to the United States by the Government after the War, but not earlier.”  It goes on to give other instructions to the family as to how to retrieve the body and receive funds for burial expenses and a possible pension.  Copies of any marriage records and birth certificates of children are then asked for. 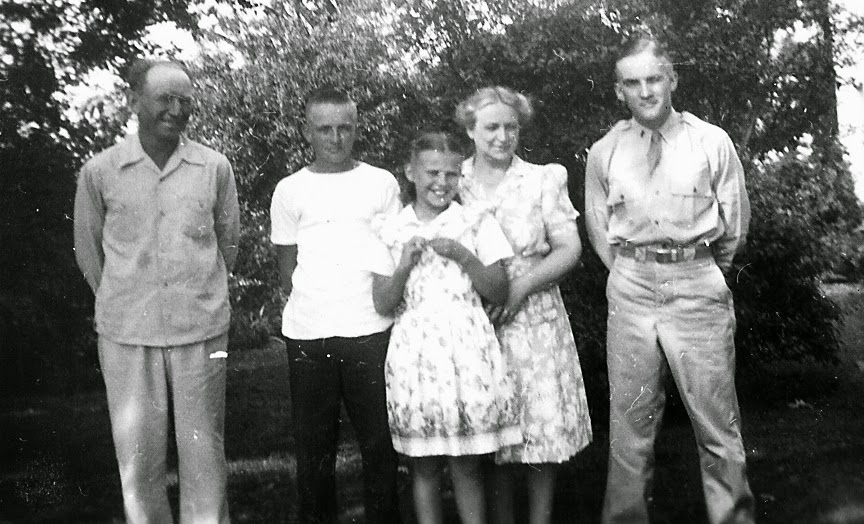 In the photo, taken at his parents’ new home in Big Rock, Illinois before he went overseas, Dad (far right) is posing with his father, little brother Richard, little sister Janet, and mother.   Perhaps his sister Helen is the one taking the picture.  He was just twenty years old when he was drafted—barely out of his teens—but forced to think about “the event of his untimely demise.”