What Ever Happened to Agnes Goldberger?

My mother grew up in a household of five children—herself, her three siblings, and a distant relative named Agnes Josephine Goldberger—an orphan from Chicago. 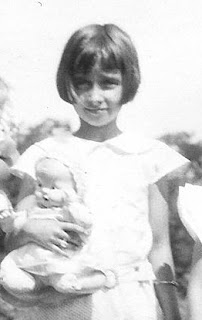 Agnes came to live with them at age six, after both her parents died, and she lived with them for about ten years.  What a change—from being the pampered daughter of a wealthy Jewish doctor in the big city, to being a farm girl, orphan, and foster child in rural DuPage County!  What was life like for her there?  Was she accepted at home, at school, in the community?  Was she an object of gossip?  Pity?  Or prejudice?  At any rate, at around age sixteen she left the Ericksons and returned to her Jewish relatives in Chicago, never to be seen again… and that’s all I ever knew about her, except that there were hard feelings in the Erickson family after she left.

I wanted to know more—so recently I did a little research on Agnes.  It turns out that her father, Henry E. Goldberger, was a physician whose parents emigrated from Bohemia to Chicago.  Henry’s first wife, Mary Ingram, died in 1922.  Henry married Agnes Evatt in 1923, when he was 53 and she was 28.

Baby Agnes was born to Agnes and Henry in Chicago on December 11, 1925.  By 1929, little Agnes’ mother was dead, and by 1933, so was her father, Dr. Goldberger…  Agnes was an orphan at age six.  Somehow she ended up on the DuPage County, Illinois farm of my grandparents, Robert and Clara Erickson.  It seems that Agnes wasn’t actually related to the Ericksons at all—but rather, her father Henry’s first wife, Mary, was a cousin of Clara’s—quite a stretch.  So how did they end up taking her in?  I don’t know.

I have a number of Erickson family photos with Agnes included.  I wonder if she was treated like one of their own, or if she always felt different, unwelcome, an outsider?  My grandpa Robert was a kind and loving man—but my grandma Clara, perhaps not so much.

Mom always said that Agnes’ family suddenly wanted her back when she turned sixteen and she inherited her father’s money, and so Agnes left them without so much as a thank you—but my grandma Clara was no amateur when it came to holding a grudge, and I think my mother was just parroting what she heard at home.  I’ve always wondered if there was more to the story.  What happened to Agnes Goldberger after she left the Erickson farm around 1942?  Maybe someone out there knows the answer. 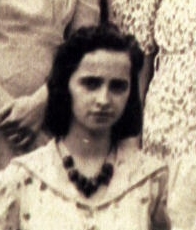 Postscript:  Some time after publishing this article here in July 2013, a granddaughter of Agnes found it in a google search. Her mother, one of Agnes' daughters, read it to Agnes. Agnes had changed her name after she left, and she had never shared anything about her childhood for the rest of her life. Sadly, she was still unwilling to talk about it, except to give her daughter permission to tell me that she was the person in my post, and that she was still alive.

In 2015 an alert reader found a facebook post from a grandson of Agnes which was a memorial to Agnes' recent death. The photo showed her on her wedding day, and the resemblance to my photos was unmistakable.

In September 2019 I was contacted by another of Agnes' daughters.  After Agnes left my grandparents' farm at sixteen, she went to live with distant relatives, changed her first name, and took on their last name. Eventually she married and had four children.  She never talked about her childhood with her children, and raised them with the belief that she was a natural-born member of the family she went to live with at sixteen.  Her reasons will always remain a mystery.