Skeletons in the Closet, Revisited 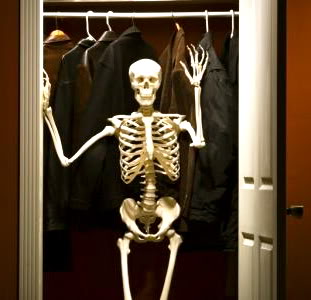 The other day I was thinking about a client for whom I did two ancestry binders in the last couple of years…  I discovered something in her family tree that no one looks forward to finding—slave owners.  It reminded me of other skeletons I’ve found in people’s closets (including my own)—which brought to mind a post I did last fall on the topic. 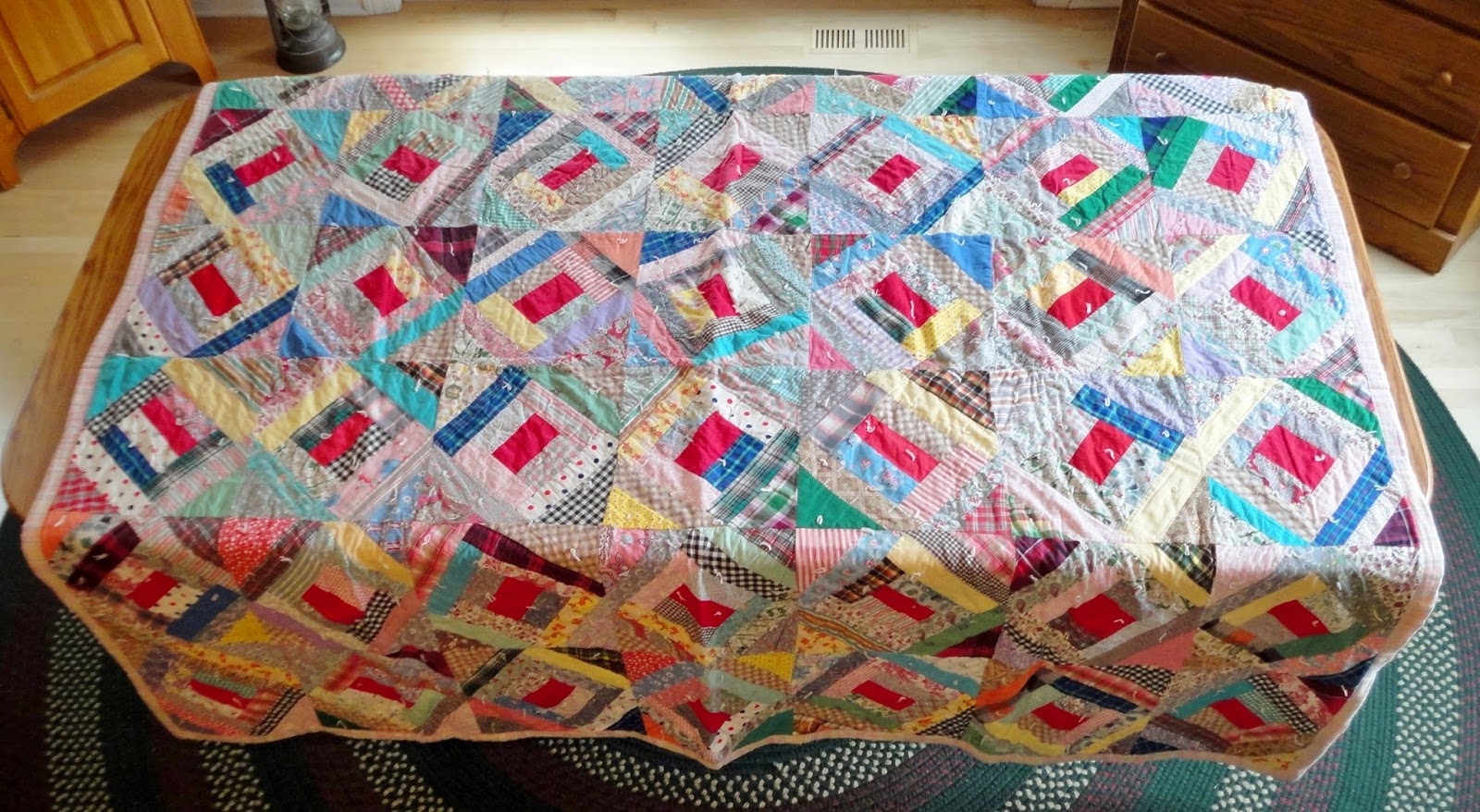 When Hazel Garver made this quilt in the 1940s, she couldn’t have known that one of her descendants would be writing about it 70 years later.  For Hazel, it was just another household task—but for me, it’s a piece of art and a treasure.

Several years ago my mother-in-law, Donna, gave me this very special quilt, and when we visited Donna recently in Jenison, Michigan, I took the opportunity to find out more about it. 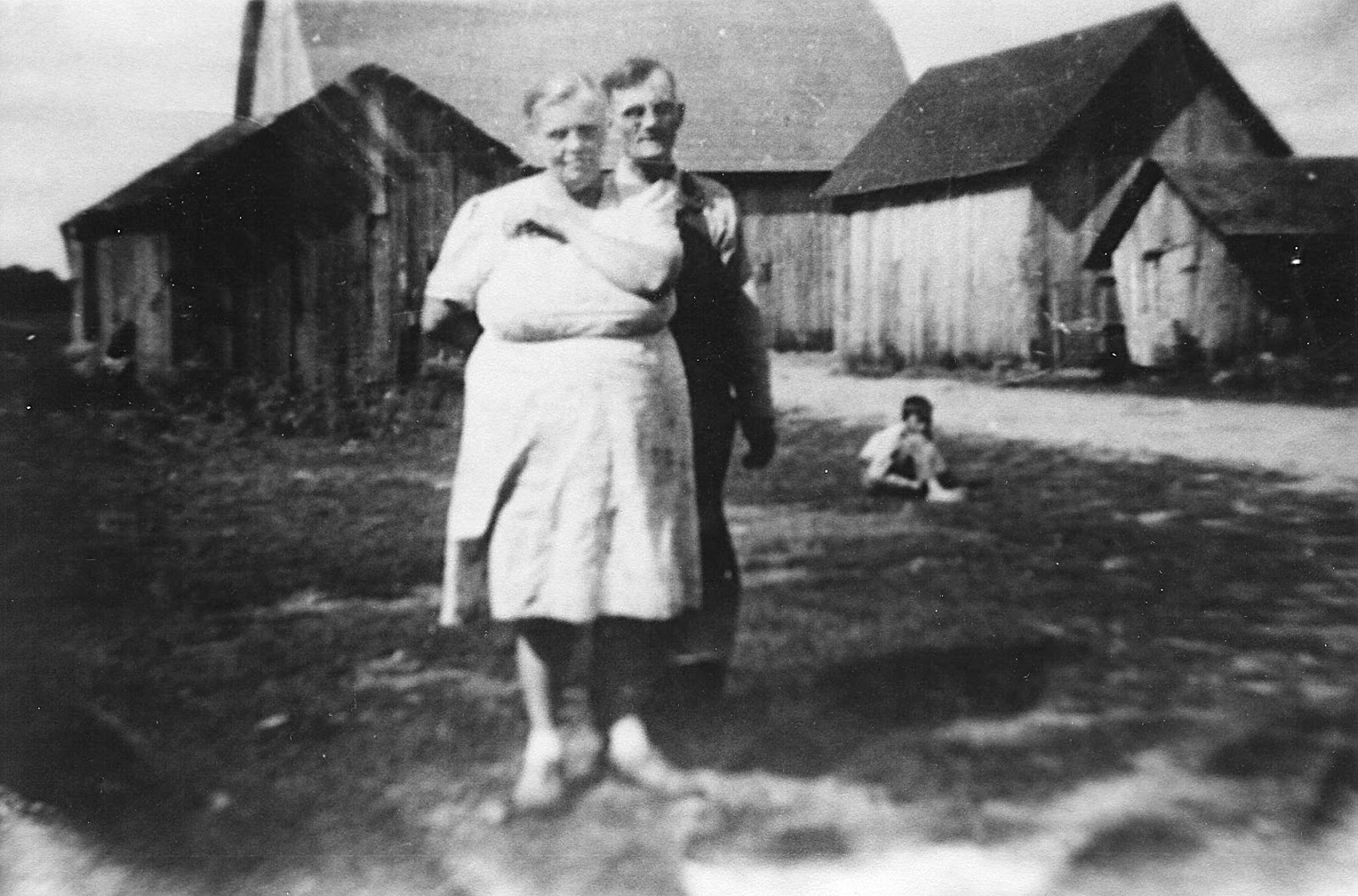 Donna’s mother, Hazel Alwood Garver (shown here with husband Walter), raised fourteen children in a tiny farmhouse in Clare County, Michigan.  (I have written about Hazel and her family before.)  Hazel made quilts out of necessity, as a way to keep her children warm in the beds they shared.  But she also put thought into her designs, Donna told me; the fabric choices weren’t just random.  The quilt tops were made from pieces of old clothing that were too worn out to be handed down one more time.  The backing was a piece of cotton or flannel—pink in this case.  The batting layer in the middle (added for warmth) was usually an old, worn blanket.

Donna remembered some of the pieces in this quilt, which she guessed that her mother made in the 1940s.  A blue plaid piece came from an apron belonging to Hazel.  Another plaid piece of red and gray came from one of Hazel’s dresses.  Donna said that her mother would share and exchange fabric scraps with her friends and neighbors, so they all would have a nicer variety to work with.  The other women, especially her good friend Lois Denno, were generous in sharing their scraps with Hazel, knowing she had fourteen children to keep warm.

Hazel would have sewn the pieces together using her Singer treadle sewing machine; there was no electricity in the farmhouse.  The three layers would then be layered together, and the underneath layer was turned up around the edges onto the top layer and machine-stitched in place all around.  After that, the ties (which can be seen in the close-up photographs) were added, to keep the layers in place.  Donna said that the children would help with that part.

Some women had a full quilt-sized wooden frame in which to stretch the three layers, but not Hazel; there wasn’t room for a big frame in their tiny home.  Hazel had a smaller frame that rolled up the quilt like a scroll, with one long strip exposed at a time so that it could be hand-tied.  After the knots were in place all over the quilt, all the ends were cut to a uniform length.

I asked Donna if her mother would work on the quilts in the evening after her children were in bed.  She said that wasn’t possible, because the kerosene lamps weren’t bright enough.  Hazel had to work on her quilts while the children were in school.  As soon as one quilt came off the rack, another one was started—there was always a need.

I wondered if Hazel kept making quilts even after her children were grown.  Donna told me that wasn’t the case—in fact, the quilt I was holding was the last one Hazel ever made.  Hazel had a stroke one day in her friends the Dennos’ orchard, and one arm and hand were never strong again.  She slowed down after that, and wasn’t able to sew very much.

I promised Donna I would take good care of her mother’s quilt.  I am glad to own a piece of Garver history and to know a little more about the woman who created it.