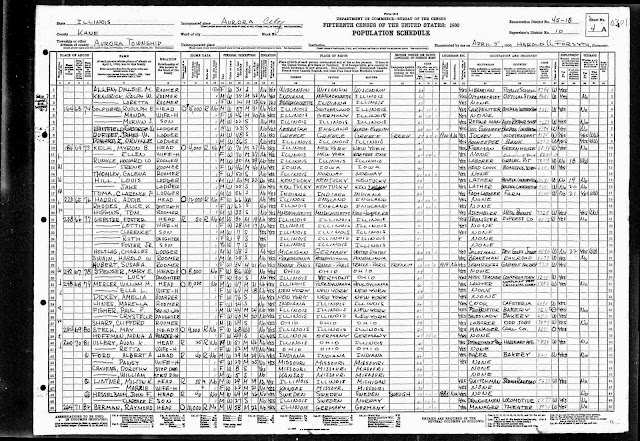 Working on an ancestry binder for a client, and came across this 1930 census record for Aurora, Illinois...  Census taker was Harold Forsyth.  Look at the wonderful rows of neat printing!  What if all census records looked like this!
Posted by Susan at 10:46 AM No comments:

Recently I found another great story from the vast riches of my latest client’s family tree.  This one crosses two centuries and four states.  It’s the story of his 5th great grandfather, John “Captain Jack” Hurst, and his two wives and many children.  For the details of this story, I draw from the work of many researchers before me, who left notes on several trees on rootsweb.

John Hurst was born in 1732 in Virginia; his father William had come from England in 1715.  He was married to Lydia Ann Smith around 1760, and they had ten children.  (One daughter, Nancy, was most likely an orphaned niece of Lydia’s whom they adopted.)  But Lydia died in 1786, not long after having her last child.  This left John, who by now was a Revolutionary War veteran and a prosperous landowner in Virginia, a widower at age 54—but not for long.

John was called “Captain John” or “Captain Jack” during his lifetime, but this was a nickname.  His rank in the military was Lieutenant, according to what scant records exist, and that’s what the military grave marker issued in 1955 says (application pictured).  His large family was often referred to as an “army,” so perhaps that’s where the nickname came from. 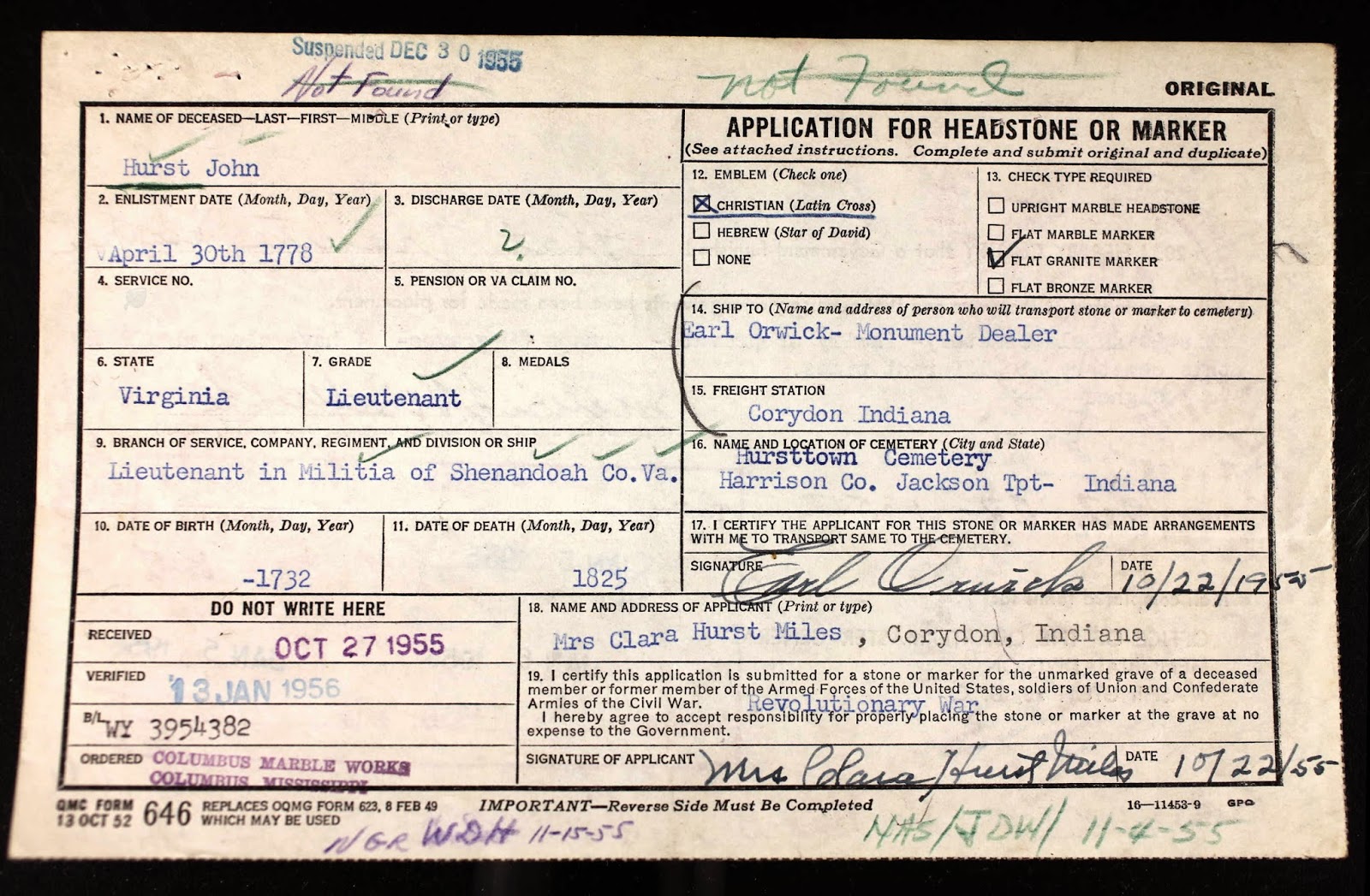 “John heard of Mary [Lindsey], a widow in Georgia, and hitched up his 4-horse team and, taking several of his slaves and provisions for the journey, went to see her.  Immediately on his arrival, he proposed and gave her until the next morning to think about it.  Next morning after breakfast he pushed back [the table] and said (he had a deep commanding voice), “Well, what do you say about it?” and she said “Yes.” He gave orders to his slaves and promptly loaded up her household effects and along with her children, took them to his Virginia home.”

“John [Jack] Hurst was raising an army of his own which was destined to fight battles west of the Cumberland Mountains, as we shall see...  He chose his first move to Green County, Tennessee about 1790 and remained there ten years…  He then gathered his large family of sons and daughters and many grandchildren, and moved north-eastward through Kentucky, stopping at Beargrass Creek in what is now Bullitt County, Kentucky.

John Hurst, now 71 years of age, marshaled his forces and crossed the Ohio River in 1803.  John settled his “army” twenty miles west of New Albany, Indiana…  John Hurst had now found his Paradise in a new land far from the grand old dominion of his nativity.  He now had all of his family with him, with the exception of one, son, John, who broke ranks and strayed off to Kentucky…  In 1806 this John Hurst and his family drifted across the Ohio River and renewed his place in the hitherto unbroken ranks. It was a second lucky twist of fate that his son William 14, was not drowned in crossing the Ohio River, or else you would not be reading this story.”

John became quite the leader in Hursttown, Indiana.  According to a history of the area written by Mrs. Victor MacIntosh, John deeded land for a school house, a Methodist church, and a cemetery.  Other families came and settled near them, and Hursttown became a community center with a post office, shoe shop, and blacksmith’s shop.  John served as sheriff of Harrison County from 1812 to 1816.  Whitten Chapel, the church he founded, was the first church built in Jackson Township.  One researcher claims that John bought eighteen quarter sections of land and gave one to each of his eighteen sons and stepsons, so that they would settle there.

Captain Jack died in 1825 at the ripe old age of 93 and is buried at Hursttown Cemetery in Harrison County, Indiana.

Levi Newton Scott, In War and in Peace 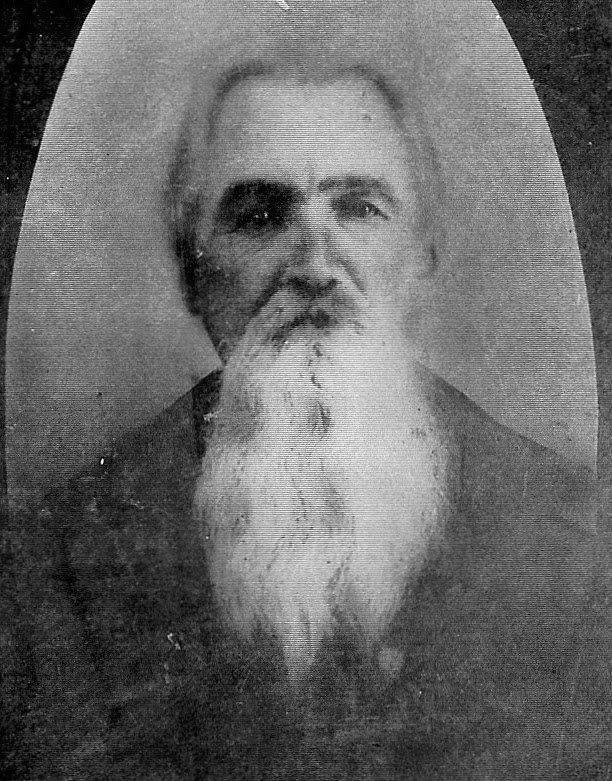 I found another great story on my latest client’s tree…  This one concerns one of his 3rd great grandfathers, Levi Newton Scott.

Levi was born in Tennessee in 1841, fourth son of Anthony “Hanty” and Lucinda Barnes Scott.  (Family tradition has it that Lucinda was Cherokee Indian, but that remains to be proven.)  He grew up in a large farm family that moved from Wayne County, Tennessee to Dallas County, Missouri in 1854.
Levi served in the Union forces during the Civil War (as did his father).  Familysearch.com turned up three different service records for Levi.  The first shows him in Company G of the Dallas County Regiment of the Missouri Home Guard, where he served from June to September 1861.  The Missouri History Museum website (www.civilwarmo.org) tells us this about the Missouri Home Guards:

Created in the summer of 1861 by General Nathaniel Lyon, the Home Guard were to stay at home and go into action only to defend their neighborhoods. Around 15,000 Home Guard were enlisted.  They were armed by the Union government but received no pay unless on active duty.  They wore no uniforms, and only 10,000 troops actually received weapons—the rest used their own.  Camp gear and food were supplied for some when on active duty.  Approximately 241 Home Guard companies were formed, but they were disbanded in late 1861.

By 1862 Levi was married for the first time, to Elizabeth Ann Box.  They had at least three children in the next six years.

In the meantime, Levi ended up back in the military—pressure must have been strong for volunteers, even married men.  This time, he was in Company M of the 8th Cavalry Regiment, Missouri State Militia.  The regiment saw action all over Arkansas and Missouri—scouting, attacking trains, capturing a fort, and other operations.  He also spent some time in Company H of the 14th Cavalry Regiment in April 1862 to March 1863.  The 1890 veteran’s census tells us that  he served three years (1862-65) during the “war of the rebellion” and that he was injured—but at least he survived.  Civilwararchive.com tells us that the 8th Cavalry Regiment lost 77 enlisted men to war injuries and 131 enlisted men to disease during the course of the war.

A few years after the war, Elizabeth died at age 25.  Levi found himself a widower at age 27 with three young children—Sarah, Melissa Ann, and Henry.  As was often the case in those days, within a year the young father had found a new mother for his children.  His second wife, Mary Catherine Hoover, helped him raise his three children, and they had two more—James and Cora.  By the 1870 census they had settled down to spend the rest of their lives farming in Dallas County, Missouri.

The Veteran’s Schedule of the 1890 Census lists Levi as a Civil War veteran with an invalid pension.  His disabilities included catarrh (chronic sinus problems) and “injured with powder, right leg.”  Pension index cards indicate that he received a pension starting in 1880, and it was increased in 1912. Mary Catherine died in 1904, but Levi was a widower for only a few years, marrying a third time in 1907, to Caladonia Russell Engle, who outlived him.

Levi and his family must have been proud of his wartime service to his country; his gravestone proudly displays the details.  He died in 1915 at age 74 and was buried at Reynolds Cemetery, next to his second wife.

Photos:   Connie Chrisman Hatch on findagrave; ancestry.com; Amanda424 on findagrave.
Posted by Susan at 6:00 AM No comments: